Nuclear power supporters have found a new flogging horse: villains of James Bond movies. The villains have cast a long-lasting shadow over the image of nuclear power, says David Phillips, president of Royal Society of Chemistry. 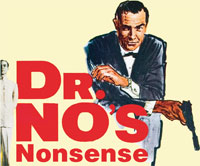 Phillips believes popularity of the 1962 movie Dr No, named after its main villain, created a negative image of nuclear power—as something dangerous that could be wielded by megalomaniacs with aspirations of world domination. The villain, planning mass destruction from his secret Caribbean hideout, eventually dies in the cooling pool of his reactor, having been foiled by James Bond, played by Sean Connery.

Richard George of Greenpeace described the allegations as “laughably simplistic”.