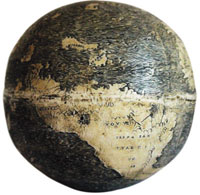 An Austrian collector has found what may be the oldest globe, dated 1504, to depict the New World, engraved with immaculate detail on two conjoined halves of ostrich eggs. The globe, about the size of a grapefruit, is labelled in Latin and includes what were considered exotic territories like Japan, Brazil and Arabia. North America is depicted as a group of scattered islan ds. The globe’s lone senten ce, above the coast of South east Asia, is “Hic Sunt Dra cones (Here be dragons).”

“It’s a very interesting sentence,” said Thomas Sander, editor of Portolan, journal of the Washington Map Society. “In early maps, you would see images of sea monsters; it was a way to say there’s bad stuff out there.” The only globe on which this specific phrase appears is Hunt-Lenox Glo be, dated 1510 and housed by the Rare Book Division of New York Public Library. Before the ostrich egg globe, the copper globe was the oldest known to show the New World. The two contain remarkable similarities.