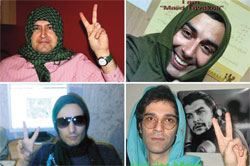 A new anti-government movement has sprung up in Iran—with supporters outside—with men posting pictures of themselves on the Internet wearing women’s head scarves as a political statement.

The movement began in early December as an online backlash after the arrest of one anti-government protester, Majid Tavakoli. The Iranian news agency Fars published a photograph of Tavakoli in a scarf. The government claimed the 22-year old had been caught wearing the garment in an attempt to hide himself and avoid arrest.

But Tavakoli and his supporters claimed that was not true.

Within hours of Tavakoli’s arrest, Iranian men began posting pictures of themselves online wearing head coverings that are mandated for women in the Islamic republic.

Hamid Dabashi, professor of Iranian studies at New York’s Columbia University, told cnn that the pictures are against strictures on Iranian women to accept a dress code, according to Dabashi. “Proud to wear my late mother’s rusari, the very rusari that was forced on my wife,” his Facebook page notes.