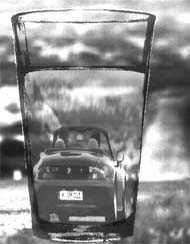 by working out how aromas can be extracted from food, two scientists from California, usa , have solved one the most vexing environmental problems that is faced by many nations, the us included: cleaning up groundwater contaminated with a potentially carcinogenic (or, cancer-causing) additive.

To improve the efficiency of combustion and to minimise air pollution, many us states have added methyl tertiary -butyl ether (mtbe) to vehicle fuel. Although mtbe- added fuel does cut down pollution and increases efficiency of the automobile engine, it has led to other, hazardous problems. mtbe dissolves readily in water and is thus gradually building up in reservoirs of groundwater. And worst hit among the affected states is California.

Chemical engineer Marc Sims, who runs a company in Berkeley, California, called Marc Sims Supercritical Fluid Extraction, and molecular biologist Jim Robinson, who has his own company in Livermore in California called Setec, have jointly developed a powerful yet simple device for separating molecules using liquid carbon dioxide (co2). Their contraption sends fluid through a tube made of polypropylene membranes suspended in a chamber of liquid co2. The co2 , but not the fluid, can flow back and forth across the membranes. It collects molecules that prefer to dissolve in liquid co2. These molecules gradually disappear from the fluid, which is left slightly carbonated but filtered of the carcinogenic mtbe .

The researchers originally used their device, which they call the PoroCrit, to extract the chemicals responsible for the aromas in foods such as orange, lemon, apple, garlic, onion and butter. But while they were busy purifying these essences, problems with mtbe in the groundwater made it to the front pages of the local and even national dailies. "It took a little while to sink in," says Sims. "It's an ether, exactly the sort of compound that we have been extracting all along," he adds.

So Sims and Robinson began to experiment with mtbe -contaminated water vapour several months ago. They found that just one pass through their device, the PoroCrit, reduced the mtbe levels up to as much as one million-fold. They are currently testing a larger model that will be able to purify contaminated water at an astounding rate of 10 litres per minute.

Currently available methods of decontamination do not work very well for mtbe. Sims and Robinson are quite confident that PoroCrit will be the most effective way to clean up mtbe -contaminated water. The researchers have been contacted recently by the California state government, fuel associations and the federal Environmental Protection Agency.

Although the us government classifies mtbe as a "possible carcinogen" only at concentrations above 20 parts per billion (ppb), the water smells of turpentine when the chemical is present at just 15 ppb. "People can smell it when they are in the shower," says Sims. However, the slightly fizzy liquid produced by the ProrCrit after the decontamination process is complete has no smell at all, thankfully.