Painkiller given to animals was killing the birds 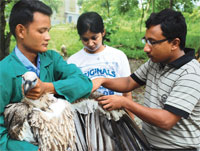 BAN ON the drug diclofenac, administered on domestic animals, has had a positive impact on the vulture population. It had not been quantified till recently.

The rate of decline has slowed down—from 40 per cent to 18 per cent. The number of oriental white-backed vulture (Gyps bengalensis) had dropped drastically by 99.9 per cent before the ban was imposed.

A study of data collected during three surveys conducted between 2004 and 2009 found a drop in the presence of diclofenac in animals after the ban was imposed in 2006. The study was published in the journal PloS ONE on May 11, 2011.

The number of the birds, however, is still not expected to increase drastically because diclofenac remains at about half of the level before the ban. The drug needs to be removed completely.

According to wildlife veterinarians, the key cause of their death was food poisoning. The birds were feeding on dead animals that had been administered diclofenac as painkiller. When Gyps species fed on these carcasses they faced acute renal failure and died.

Vultures are among the top predators and critical to maintaining ecological balance in nature. Decline in their population got the bird enlisted in the critically endangered category in the IUCN Red List of Threatened Species.

Alarmed by this, in 2006 the governments of India, Pakistan and Nepal ordered a ban on the production and sale of diclofenac.

“The study is the first to measure whether the ban on diclofenac in India is working or not,” says Rhys E Green, professor of conservation science at the University of Cambridge. Presence of even a small number of contaminated carcasses can result in a huge dip in the vulture population, says Martin Gilbert, Associate Director-Asia of Wildlife Conservation Society in New York. It is, therefore, important to maintain vigil and prevent sale of drugs in countries where vultures live.