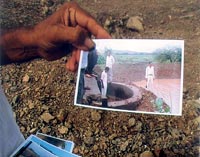 The banks of the Narmada river have witnessed some extraordinary struggles for human rights and dignity over the last 20 years. Thousands of people, who used to be inhabitants of this area, have already been uprooted from the site of the proposed dam projects -- and many thousands more will be evicted soon. Director Sanjay Kak looks into the logic of building a dam at the site and the benefits of this giant project of development.

Adopting the slogan, "shasan valo, sun lo aaj -- Hamere gaon main hamaara raj (Listen to us, you who rule, we control our villages), the struggle has forged distinctive -- and unexpected -- alliances among Adivasis, farmers, sand quarriers and fisherfolk, in addition to middle class activists and urban page-three celebrities, all of whom have been pitted against the might and power of ministers, police commissioners, the World Bank and multinational corporations.

This beautifully shot film chronicles the dialogue that the powerless have sustained with authority. A dialogue in which the promises of the powerful, who have eagerly adopted a regressive model of development, are as unsubstantial as words on water.

Shot over a period of two years, during a critical period after the Supreme Court of India lifted the ban on the Sardar Sarovar dam, Words on Water narrates the struggle of those armed with little more than a conviction in non-violent resistance and defiance.