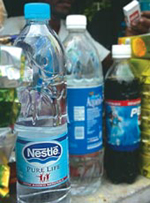 Nestl has decided to exit from the bottled water business in India. The world's leading manufacturer in the sector, the company was selling its product in India under the brand name Pure Life.

Pure Life had been launched in February 2001 with the avowed ambition of becoming "a strong number two in the short term and the largest player in the long term". The returns, however, belied these hopes. After a review of the business done last year, the company found the product financially unviable. Experts put the blame on poor distribution and pricing strategies (Pure Life was marketed at Rs 12 a litre while other brands sold for Rs 10).

The bottled water business in India has been under a cloud ever since the Centre for Science and Environment detected pesticide residues beyond permissible limits in the products of leading brands. Himanshu Manglik, communications manager, Nestl India, clarified, saying that the company's decision to exit is "completely independent of the new standards for bottled water which have been notifed by the health ministry" and are to be implemented from January 1, 2004.