Dudhna dam was built in 31 years 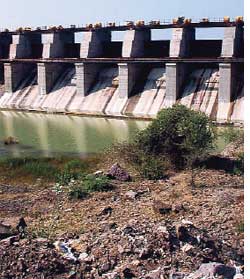 Farmers  of Parbhani district in Maharashtra have been waiting 31 years for irrigation water promised from the dam on the Dudhna. The dam, completed a couple of years ago, has over 2,000 million cubic feet water that is of no use to the farmers. “There are no canals or pipelines to carry the water to our fields,” said D V Muley, secretary of Dudhna Project Sangharsh Samiti, formed by affected farmers.

The farmers have threatened agitation and are demanding that the authorities complete canal work to irrigate at least 1,000 hectares (ha) in the next three to four months; about 28,698 ha farms in the district will benefit from Lower Dudhna project.

The Rs 1,349 crore project was sanctioned in 1979 but work began only after funds started trickling in 1994. It was speeded up in 2005-2006 when the Centre sanctioned 25 per cent of the project cost under an accelerated irrigation benefit programme.

The project’s sectional engineer, A M Parvekar, said the irrigation and electricity generation components are likely to be completed by 2013.

Irrigation officials said they could not be blamed for the delay. Farmers of 21 villages in Jalna district were opposing the project saying it would submerge 6,944 ha of land. The project is on the boundary between Parbhani and Jalna districts and the farmers of Jalna are protesting because they are getting a bad deal; most of the water will go to Parbhani. This led to delay, said V C Patil, deputy executive engineer of Godavari Marathwada Irrigation Development Corporation. He said the project is also delayed because of the way funds are released; the Centre releases funds every six months but only after surveying completed works which takes time.

Farmers said work is deliberately delayed because it is profitable for politicians and officials. Govind Joshi, leader of the state-level farmers’ union, Shetkari Sangathana, said only 7 km of the 69 km left bank canal is complete. “Machinery is at the site but construction is not happening due to corruption. If the government is serious, it can finish the work in a few months,” he said.