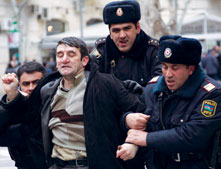 Facebook-inspired protests in Azerbaijan are turning into a cat-andmouse game. On March 14, the police blocked access to the university in the country’s capital Baku, but there were no protesters.

This, after a protest day on March 11—called by Facebook users—never materialised because key leaders were arrested.

Uzeyir Mammadli, an activist, said they had announced the March 14 protest on Facebook to mislead the police. The organisers then sent e-mails conveying their intent. “We tried to exhaust the police,” Mammadli said.