Dust off the rust

IT IS time to gear up against an old enemy that is back with a vengeance after half a century of complacence. A series of resistant wheat varieties developed in the mid-20th century kept stem rust, a devastating fungal infection, at bay for the last 50 years. But the disease has now resurfaced in a relatively new, virulent form and threatens wheat supplies in Africa, the Middle East and Asia.

A global team of researchers, led by scientists from the University of Minnesota in the US, has warned that if enough funding for disease-resistance research is not maintained to keep a check on the highly mutative disease, it could have significant and possibly devastating effects on the global food supply in near future. Continued investment in stem rust research had declined in the last few years due to several reasons, including success of past research to limit the fungus’s impact. 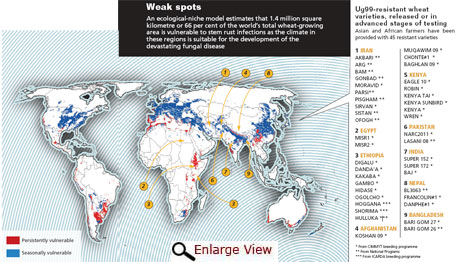 First identified in Uganda in 1998, seven races of Ug99, the new virulent form of stem rust, are now known. “The emergence and spread of Ug99 races from Uganda to all wheat-growing countries of east and southern Africa, Sudan, Yemen and Iran has alarmed wheat researchers worldwide because 80-90 per cent of all global wheat area grows susceptible varieties,” says Ravi Prakash Singh, a distinguished scientist and head of Bread Wheat Improvement & Rust Research Global Wheat Program at International Maize and Wheat Improvement Center (CIMMYT) in Mexico. “This means we have the daunting task of replacing these varieties with new varieties that have resistance,” he says.

Several projects to develop Ug99-resistant wheat varieties are under way, including an international consortium known as the Borlaug Global Rust Initiative. It is a $26 million, five-year effort funded by the Bill and Melinda Gates Foundation. But the University of Minnesota economists estimate that as much as $51 million a year is needed for developing new wheat varieties that can withstand Ug99 onslaught. The researchers, led by P G Pardey, used novel, probabilistic risk assessment methods, including climate suitability models and long-term global loss data, to reach the estimate.

Their study, published in Science on April 12, shows that had there not been investment in stem rust research and ensuing effective global control during 1961-2009, losses in wheat production would have amounted to 6.2 million tonnes annually. This is 1.3 per cent of the total global harvest and equates to losses of $1.12 billion per year at 2010 wheat prices. This much cereal is enough to satisfy almost entire annual calorie deficit of sub-Saharan Africa’s undernourished population. While much lower than previous estimates, the losses are sizeable for the effects of just one disease on a staple food crop.

“Our study shows that maintaining yield growth rates is necessary for food security of millions of wheat-dependent consumers in most developing countries. For this a sustained effort is required to develop wheat varieties that are resistant to contemporary and newer races, like Ug99, of stem rust,” says Pardey.

Wheat is one of the most important staple food crops across the world. It provides 21 per cent of the total food calories and 20 per cent of total protein to over 4.5 billion people in 94 developing countries. According to the US department of agriculture, an area of approximately 216 million hectares was sown with wheat in 2012 and produced 655 million metric tonnes of the cereal.

Wheat is infected by three species of rusts: stem (black) rust (Puccinia graminis tritici), leaf (brown) rust (P triticina), and stripe (yellow) rust (P striiformis Westend). But stem rust has historically been the most devastating of all, worldwide. It can kill wheat plants and small grain cereals but more typically reduces foliage, root growth, and grain yields. The pathogen multiplies rapidly and its spores can be dispersed over thousands of kilometres by wind. Moreover, the pathogen has the ability to evolve into new types that can render a resistance gene, utilised in protecting wheat crop, ineffective.

Pardey points out that around 68 per cent of the India’s wheat output (and 65 per cent of the country’s wheat producing area) is vulnerable to stem rust. This compares with 74 per cent of the global output and 66 per cent of the world’s wheat area being susceptible to the disease. Indu Sharma, project director at Directorate of Wheat Research in Karnal, says apart from stem rust there has also been a spread of stripe rust in India. “The strategy is to manage all three—stripe, stem and leaf—rusts,” says Sharma.

She says apart from releasing resistant varieties, the strategy involves pathogen surveillance to identify new races evolving locally in India or migrating from outside (especially Ug99, breeding-resistance varieties), introduction of new resistance genes and development and validation of molecular markers for resistance genes. “As an advanced trial, wheat material is also sent to Kenya routinely for evaluation against Ug99 race of stem rust,” adds Sharma.

Sharma points out that the strategy being followed in India to manage stem rust in wheat is successful as no major outbreak has occurred in the country for the last 40 years.

Studies show that demand for wheat in the developing world is projected to increase 60 per cent by 2050; at the same time, climate change–induced temperature increase in wheat-growing countries is expected to reduce production by 29 per cent. This scenario is worsened by stagnating yields, increasing irrigation and fertiliser costs and new virulent diseases and pest varieties, such as Ug99 of the stem rust fungus. “The best environmentally sound control measure at no cost to farmers is growing resistant varieties. New resistant varieties with higher yields than the current varieties must be released and aggressively promoted to successfully replace several popular varieties to ensure consistent cereal supply,” insists Singh.

“For this investment strategy should amount to an economically justifiable $51 million per year,” says Pardey.