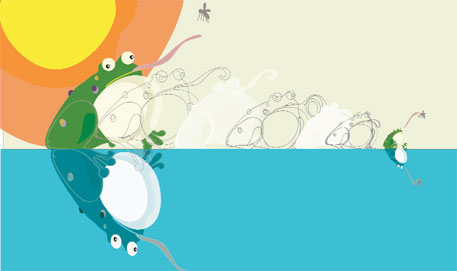 IF YOU thought climate change causes only sea level rise and intensifies natural disasters, think again. Several species of plants and animals are getting smaller over generations due to rising global temperatures and shifting weather patterns, according to a compilation of fossil records and studies by scientists of National University of Singapore. Though humans are not growing shorter, the trend could profoundly affect food security in years ahead, they warn.

David Bickford and Jennifer Sheridan analysed fossil records of 85 species and found that nearly 45 per cent of them have remained unaffected by climate change. Of those remaining, four out of five have become smaller, while a fifth have grown bigger.

Such changes in size are because of changing metabolism and ecology in response to climate change, the scientists note in their study published online in Nature Climate Change on October 16. The impact is vivid among cold-blooded animals, including insects, reptiles and amphibians. Experiments analysed by Bickford and Sheridan suggest that an upward tick of 1°C translates into roughly a 10 per cent increase in metabolism, the rate at which an organism uses up energy. This can result in stunting unless the organism compensates with more food intake, they say.

Andrew Hirst, ecologist at University of London, offers another reason: “In warm conditions, a species grows faster but matures even earlier. This eventually results in smaller adult size.” The common toad, for example, miserably shrunk in size in just two decades. So did some tortoises, marine iguanas and lizards. Their body size will shrink further as scientists predict the global temperature would rise by 1.1-6.4°C by the end of the century.

Mammals such as polar bear, red deer and soay sheep have also stunted by 40 per cent in response to warmer temperatures over the past half century.

The most worrying changes are at the bottom of the food chain, especially in the ocean, where tiny phytoplankton and calcium-building creatures are dwindling in size due to acidification and reduced capacity of warmer water to hold oxygen and nutrients. Fish size has reduced six to 22 per cent with each degree Celsius of warming. This is alarming as a billion people rely on fish as the main protein source. Shoots and fruits of a variety of plants are getting smaller by three to 17 per cent for every degree Celsius of temperature rise.

The imbalance in the food chain and the ecosystem will happen as all animals are not affected at the same rate, says Sheridan. In a predator-prey system, if the prey shrinks in size in comparison to the predator, the latter will die unless it either catches more of its smaller prey or shrinks in size itself. “We need to understand the trends and consequences of shrinking in organisms to strategise and mitigate the negative effects,” says Bickford.