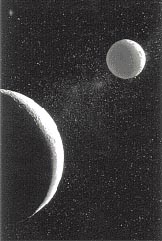 in the 1960s, an unmanned spacecraft sent to the moon saw a strange phenomenon: dust from the lunar surface was rising up. This was later confirmed by astronauts who saw the glow from the suspended dust above the horizon of the Moon. Though there was a perfectly reasonable theory as to why such a thing should occur, there had been no experimental confirmation of the theory, leaving its validity in doubt. Now, a team of scientists at University of Colorado, Boulder, usa, has finally confirmed the theory with a simple, yet elegant experiment in their laboratory.

Our solar system is filled with dust; from asteroids to planetary rings, dust plays an important role in determining the dynamics of many objects in our solar system. The levitation of dust on places like the Moon's surface was unexpected because there is no air to move the dust. However, a simple theory can explain this weird phenomenon. The ultraviolet light from the Sun gives enough energy to the electrons on the surface of a dust grain to eject them. This process is known as the photoelectric effect, and is used in devices like the electrical eyes. The grain becomes positively charged because of the loss of a negatively charged electron.

The theory is simple and straightforward and yet no experiment had been performed to actually verify the process. Now, S Robertson and his colleagues at the University of Colorado have verified its veracity in their laboratory. They used particles of zinc, copper and graphite of size about 100 micrometers (a micrometre is a millionth of a metre). These were then dropped by about 30 cm through an evacuated chamber. To simulate the conditions in the solar system, they then shone ultraviolet light from a powerful lamp. The "dust" was dropped from a vibrating plate with a small hole in the centre. The dust grains dropped into a device called a Faraday cup that can be used to measure the charge on the dust particles. On measuring the charge collected by the particles in the presence of the ultraviolet light, the researchers obtained a value that matched the one predicted by the theory.

Next, they added a second zirconium plate to the chamber, close to the path of the falling dust particles. This plate simulated the nearby moon rocks which also would lose electrons by the photoelectric effect. The effect of this plate was exactly what was expected from the theory. In the presence of the plate, the dust particles picked up the negative charge lost by the plate.

The confirmation of the well-established theory of the dynamics of charged dust particles is very welcome. This is because the phenomenon of dust charging is important to understand many different effects. It plays an important role in modelling spacecraft environments for instance. It also helps in unravelling the dynamics of dust in objects like the rings of Saturn, where astronomers have long realised that purely gravitational effects are not enough to explain the structure and motion of the rings. Even in the process of formation of the solar system itself, this understanding will help since we know that planets and other objects in the solar system coalesced from a huge mass of dust.