Earthquake forecast on a high 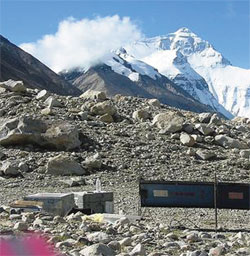 FROM the jungles in Nepal to the barren, wind-swept heights of Tibet, a team of researchers was on an unusual assignment: to profile the Earth’s structure beneath the Himalaya. They set up 230 seismic stations over 800 km. In the process they unearthed unique geological features of the Himalaya, which might explain how the region formed and why it is prone to earthquakes. Earlier, there were piecemeal images, which led to conflicting models of the Earth’s structure and the movement of plates under it. In-depth images the researchers created showed the main Himalayan crack, or fault, was the interface between the subducting Indian plate and the Tibetan crust. They found proof of subduction in the fault zone occurring from the mountain’s north and south ends. Subduction is a process in which one edge of a crustal plate is forced sideways and downward into the mantle below another plate. The layers of the Earth’s mantle at the deeper parts of the Himalayan range is moldable, said John Nabelek, lead author of the study. As a result, the lower part of the Indian crust slides about 450 km under the southern Tibetan plate and the mantle appears to shear off and break into sub-parallel segments. More the Indian crust goes under the Tibetan plate, more the epicentre shifts, a phenomenon that the 230 seismic stations would monitor. “Knowledge about the depth and geometry of this interface will help interpret earthquakes,” said Nabelek who is a geophysicist at the Oregon State University. Nabelek was part of Hi- CLIMB (Himalayan-Tibetan Continental Lithosphere during Mountain Building), a group of researchers from several countries that carried out the study published in Science on September 11. “The study brings to light the extent of the Indian crust beneath Nepal and can thus be used to detect epicentres of earthquakes,” said Subrata Sinha, former chief of Geological Survey of India in Kolkata, adding that several other areas of the Himalaya also needed to be studied