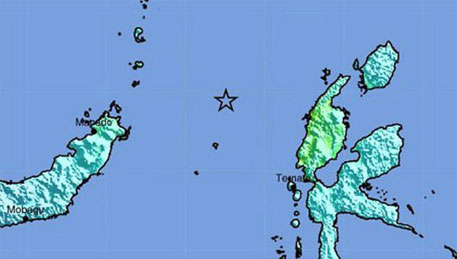 A 7.1 magnitude earthquake that was reported off the Maluku islands in Indonesia on Saturday triggered panic as people in affected areas fled their homes. Soon after the quake, the Pacific Tsunami Warning Center (PTWC) warned of possible hazardous waves of up to one metre hitting the coasts within a 300 km radius, according to a BBC news report.

PTWC subsequently revised its alert and said the threat “from this earthquake has now mostly passed”, adding that any residual threat should be assessed by local authorities in impacted areas.

The earthquake was recorded at a depth of 35 km northwest of Kota Ternate in the Maluku Islands at 10.31 am local time, the news report said quoting the US Geological Survey. More aftershocks (earthquakes of smaller magnitudes which come after the main shock-earthquake of larger magnitude) are being reported from the region.

Shortly after the first quake, another measuring 6.2 was monitored off the Indonesian island of Sulawesi, the US Geological Survey said. Indonesia lies on the Pacific "Ring of Fire" plate boundaries, and is prone to frequent earthquakes, the BBC news report said.

The earthquake was felt strongly on the Sitaro islands, where authorities warned people to stay away from beaches and riverbanks, a news report in The Guardian said, quoting Sutopo Purwo Nugroho, a spokesman at an Indonesian emergency agency.