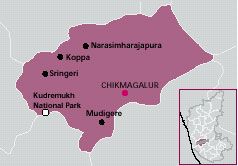 pressured by frequent naxalite attacks across the state for control over forestland, the Karnataka government is trying to denotify 12,141 hectares (ha) of the total 55,847 ha of Kudremukh reserved forest area. The state's information minister B Sivaraman recently told the media that 43,706 hectares of the forestland will remain a protected area: "We want the rest to be denotified to regularise cultivation and houses and allot government land to locals, besides rehabilitating those who have been evicted from nearby forest areas." But the move faces a major obstacle: approval by the Supreme Court (sc).

According to the state cabinet decision, the area to be denotified includes 5,469 ha of land encroached before 1978, 4,505 ha under unauthorised constructions and 2,039 ha under unauthorised cultivation. These forests are home to Gowdlu, Vokkaliga and Kuruba tribals and some other local communities. Most of them have small plots of land, which they cultivate. Their homes and small shops have sprung up as haddis(settlements) inside the forest. Rehabilitating them has been a sensitive issue for the government. Following the encounter deaths of two naxalites in February 2005, it announced a Rs 23 crore-package to rehabilitate 201 of the 1,300 tribal families living in the Kudremukh National Park in Chikmagalur district.

Karnataka's forest secretary Deepak Sharma told Down To Earth that the state government's denotification proposal has already been filed in the sc . But the government might be reprimanded by the sc, which had passed an order in 2000 to curb denotification. The order made an sc approval mandatory for any such activity. The proposal will also need clearance from the Union ministry of environment and forests.

"The state government will not be able to implement its decision as the sc is not likely to allow it," conjectures Ritwick Datta, a lawyer. The sc had even directed the state government two years ago to clear the illegal encroachments on the forestland. But all subsequent government action in this regard faced strong protest from the tribals in Koppa, Sringeri, Narasimharajapura and Mudigere taluks.
Some experts also believe the government's move is misdirected. "It's the living conditions of the people that has to be improved," suggests A M Annaiah, division forest officer, Kudremukh Wildlife Division, Karkala. "The naxal activity has nothing to do with the rehabilitation process. The encroachers, as per the sc order, will have to leave one day, though those in the revenue areas will not be evicted," he adds. Annaiah claims no forced evictions are taking place in the forest.