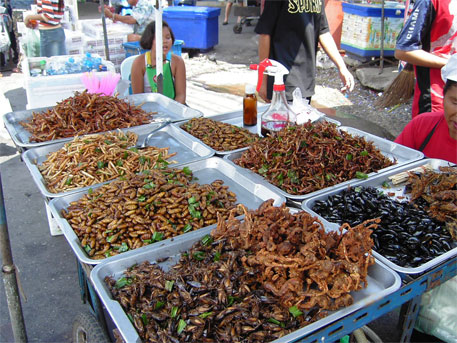 The United Nation’s Food and Agriculture Organisation (FAO) in its recent report has suggested that eating insects like beetles, caterpillars, bees, wasps, ants and grasshoppers can help fight hunger and malnutrition. This would help in food security and would provide employment, says the report “Edible insects: Future prospects for food and feed security”.

The report says there are about one million known species in the world and insects account for more than half of all living organisms classified so far. Insects are one of the major and readily available sources of nutrition and it is estimated that insects form part of the traditional diets of at least 2 billion – one-third of world’s population. The report was released on May 13 in Rome during a three-day international conference on Forests for Food Security and Nutrition that culminates today.

According to FAO’s research, carried out along with Netherlands’s Wageningen University, humans worldwide consume more than 1,900 insect species. Of these, the most consumed insects are beetles (31 per cent), caterpillars (18 per cent), bees, wasps and ants (14 per cent) and grasshoppers, locusts and crickets (13 per cent). Many insects are rich in protein and good fats and high in calcium, iron and zinc. Beef has an iron content of 6 mg per 100 g of dry weight, while the iron content of locusts varies between 8 mg and 20 mg per 100 g of dry weight, depending on the species and the kind of food they themselves consume.

The report’s co-author Eva Muller explains, “We are not saying that people should be eating bugs. We are saying that insects are just one resource provided by forests, and insects are pretty much untapped for their potential for food, and especially for feed.” Muller is also director of FAO’s Forest Economic Policy and Products Division. Besides, insect gathering and farming can offer employment and cash income, for now mostly at the household level but also potentially in industrial operations, FAO suggests.

The report says that trade in insects was thriving in cities such as Bangkok and Kinshasa and that a similar culture of insect consumption - entomophagy - should be established elsewhere, stressing that it was often cheaper to farm insects. It concludes saying: “History has shown that dietary patterns can change quickly, particularly in a globalised world. The rapid acceptance of raw fish in the form of sushi is a good example.”

However, Muller admitted, “consumer disgust remains one of the largest barriers to the adoption of insects as viable sources of protein in many Western countries.” But she contended that brands such as yoghurt maker Danone and Italian alcoholic drinks maker Campari used dye from insects to colour their products. Notably, Danone has been selling its yoghurt in India for quite some time now.