Fourteen years after Germany scored a worldwide first by adopting eco-labelling, there still remain doubts about selection and evaluation procedures used in the system. 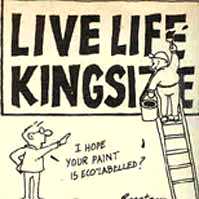 HAS THE "eco-angel" fallen from grace? Fourteen years after West Germany adopted eco-labelling, its efficacy is still in doubt because of faulty selection and inadequate evaluation of product impact.

Today, the eco-angel -- the blue angel symbol that denotes environment-friendliness of a product -- adorns as many as 3,600 products, including recycled paper, water soluble paints and varnishes, some detergents and electrical equipment such as lawn mowers and washing machines. While all manufacturers can advertise their products as environment-friendly and biologically-sound, eco-labelling is based on fixed and demonstrable award criteria, set and controlled by an independent jury in close collaboration with the Federal Environment Office (UBA). Jury members include consumers, environment organisations, trade unions, churches and environment departments of local governments.


Consciously, the jury confines its checks to products that are normally a burden on the environment and for which, alternatives and improvements are possible. So, the eco-angel is awarded only to the "best of the bad". And this is where the trouble reportedly begins. For example, paints and varnishes, which make up more than one-fourth of all labelled products so far, still contain some poisonous solvents and small amounts of lead or cadmium. But the eco-angel can cause the consumer to ignore these risks.

Rainer Griesshammer from the Oko-Institute in Freiburg contends the selection of products is "rather erratic". Of the product groups labelled recently, only detergents are important. The others -- lead-free seals, cadmium-free plummets and textmarkers -- are of minor ecological impact. Griesshammer recommends the jury should concentrate on a few but relevant product groups such as plastic, glass and wood, and says, "Priorities should be on the basis of life cycle analysis."

The German consumer's knowledge about eco-mark is reasonably high -- nearly 70 per cent know what it stands for. But how far does it influence consumer decisions? UBA's showpiece is the case of water soluble varnishes. When the varnishes were awarded the eco-angel, their market share was just 1 per cent, but within 10 years it rose to 20 per cent. Sale of environment-friendly central heating systems, too, may have been pushed up by eco-labelling. But UBA admits reliable information about improved sales or a change in the market share of a product as a result of the eco-angel is difficult to obtain.

Consumer organisations, too, are afraid the eco-angel may send out wrong signals. Scientist Christine von Weizsacker points out, "The eco-mark is oriented towards consumption. It could give the impression that by buying and consuming, one can act as a guardian angel for the environment." In the process, environmental problems linked to lopsided consumption patterns, lifestyles and value systems might get overlooked. These reservations were taken into account partly when, some years ago, the inscription on the eco-label was changed from the rather positive "environmentally friendly because of..." to the more neutral "eco-label because of..."


However, environmentalists, Griesshammer for one, contend the eco-mark is not "part of a carefully planned and executed product policy". Eco-labelling reacts only to the worst cases. And, it enables policy makers to avoid radical actions. For example, the eco-labelling of CFC-free spray cans lulled the consumer into a false sense of security, while the hard option -- a total ban on CFCs -- was only taken in 1990. "This is merely a case of the state shifting responsibility to the consumer," complained Hannelore Friege, a member of a regional consumer organisation.

While Griesshammer considers eco-labelling itself "a genuinely useful instrument for consumer advice and public procurement activities", he doubts its ability to bring about substantial changes, without any other measures, such as bans and ecological levies, to prop it up.

Weizsacker cautions also that eco-labelling could lead to environment statism and eco-red-tapism. His warning is directed not so much at the German scheme, which has so far worked independently, but to the EC's plan for a European eco-label which might replace the eco-angel in a few years. The bureaucrats in Brussels have proposed that the eco-label should be awarded by government institutions, rather than an independent jury.