Contrary to general perception, rural people in India are spending more on commodities that are considered major urban expenditure

Contrary to general perception, rural people in India are spending more on commodities that are considered major urban expenditure, such as food, energy, cereals, pulses, vegetables and medicines. These are the items that have been driving India's food inflation. According to the National Sample Survey Office, from 2007-08 to 2011-12, the monthly per capita consumption expenditure (MPCE) in rural areas increased at a compound annual rate of 16.7 per cent, while MPCE in urban areas was 15.6 per cent. A look at how people in rural areas have beaten their urban counterparts in key consumer expenditure 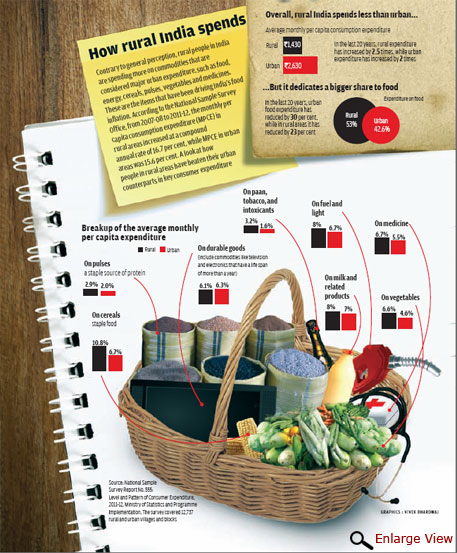 Report: Public distribution system and other sources of household consumption

Report: Atlas of household energy consumption and expenditure in India