Ecotourism can backfire if mismanaged 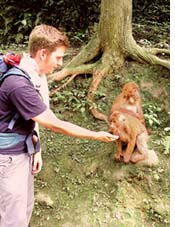 wildlife and environmental experts say promoting ecotourism helps generate funds for wildlife protection and conservation of their habitat. But a recent study in China suggests the concept can backfire if not managed properly.

Tibetan macaques (Macaca thibetana) in the Mount Huangshan Scenic Area, a tourism centre in Anhui province, are showing increased level of adult aggression and infant mortality since ecotourism began in the reserve in 1991. The World Conservation Union (iucn) classifies the macaques as 'conservation dependent'.

Carol Berman of New York University at Buffalo, usa, and a team of Chinese scientists looked into the impact of tourism on the macaques' behaviour for 19 years--the study began six years before ecotourism started at Mount Huangshan.

The group observed that after the primates were shifted from their natural forest range, their movement was highly restricted and they had to compete for food, which was provided in designated areas. The restrictions were to ensure that spectators could easily view them. But this range restrictions accounted for over half of the infant mortality each year, suggest data collected between 1992 and 2004. The group also observed that regular competition for provisioned food and high fear-induced stress led to increased aggression among the adult macaques, and also towards their infants. The study results will be published in the International Journal of Primatology shortly.

The study is significant for India with its large population of monkeys and a promising ecotourism industry.

"I have observed aggressive behaviour of some rhinoceros and tigers in tourism zones. They charge at vehicles and some times attack people without any provocation," says K Shankar, professor and research coordinator at the Wildlife Institute of India, Dehradun. "However, it has not been verified if animals remain aggressive in the absence of tourists as well," says Shankar.