Even as the us goes global in its agenda to tackle religious terrorism, domestic media has started zooming in on militancy of a new kind -- eco-terrorism 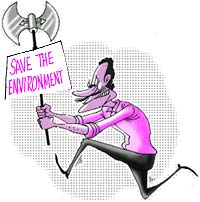 Even as the us goes global in its agenda to tackle religious terrorism, domestic media has started zooming in on militancy of a new kind -- eco-terrorism. In its recent report, cbs television network threw took up the issue of environmentalists increasingly resorting to violence to get their point across. The debate was spawned by recent actions of Earth Liberation Front (elf), which calls itself "an international underground movement", proudly proclaiming that "since 1997, elf cells have carried out dozens of actions resulting in close to us $100 million in damages". The group recently torched down four houses under construction in San Diego to check urban sprawl. Hummer, a brand of sports utility vehicles (suvs), has also faced the group's wrath for being "gas guzzlers and polluters". Animal rights activists seem in a warring mode too. fbi reports more than 600 incidents, since 1996, of radical activists attacking businesses and labs seen as abusing animals or the environment.

Economic sabotage of environmentally destructive enterprises is seen as imperative by this brand of activists. "Driving a hummer, a us $50,000 gm (General Motors) tool for the rich, getting 10 miles to the gallon -- that is violence. Going in and torching those and getting rid of those is an act of liberation and should be applauded," said Craig Rosebraugh, former spokesman, elf, in an interview to cbs News. Activists are clearly frustrated by the failure of peaceful means to protect the environment. "There's definitely going to be more actions, because that frustration level continues to grow," predicts Rosebraugh.