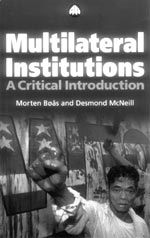 With the failure of the Cancun meet of the World Trade Organization (wto), the fate of multilateral institutions has been thrown into high relief. But much of the criticism and support of, say, the World Bank and wto, is based on ideological positions. Authors summarise the need for this book quite succinctly on page 2: "The views of those who support these institutions and those who argue for their substantial reform or closure are often not based on a well-grounded understanding of the multilateral institutions: how they are financed and organised, and how they interact with client countries, donor countries and each other. This contributes to the failure of effective dialogue between the differing camps. This book is a modest attempt to improve the situation." The 184-page book holds your hand and takes you through the realpolitik of multilateral institutions and their biggest critics and supporters, providing an engaged and nuanced critique. Of special interest is the last chapter on the future of these institutions. Educate yourself!