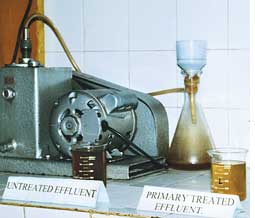 A hub of dyeing units in Tamil Nadu, Pallipalayam is an exhibition of groundwater pollution from industry. The Cauvery river is joined by steady streams of industrial effluents; tannery units upstream have already done their bit. In the heart of this industrial darkness is a story of farmer-industry simpatico that began in the 1980s.

A paper factory treats its effluent and gives it to about 500 farmer families to irrigate their sugarcane fields in about 650 hectares (ha). The farmers sell the cane to a sugar mill, which extracts the juice from it to make sugar--and gives the byproduct bagasse to the paper mill to make paper. "It is a closed-circuit system. There is no discharge into the river,'' said K Shanmugam, who heads the factory's environment unit. The treated effluent meets quality standards.

The factory on the banks of the Cauvery belongs to Seshasayee Paper and Boards Ltd. Among the first farmers to take up sugarcane cultivation with treated effluent in the 1980s was Sengotuvel Gounder of Papanpalayam. His fortunes have changed since his family subsisted on Rs 2,000 a year from groundnut cultivation; his son Nallasivan today makes between Rs 10,000 and Rs 15,000--per 0.4 ha--harvesting up to 70 tonnes of cane on about 3 ha. Gounder never went to school but his granddaughter is studying in Chennai for a post-graduate degree.

"Farmers saw the money and switched,'' he said. There are several signs of prosperity: pucca houses, cars, motorcycles. A large Great Dane guards the entrance to the house of Manoharan P, a cane farmer of Odapalli village. His father worked in the factory; his daughter goes to an expensive boarding school in Ooty. "I make Rs 20,000 per 0.4 ha growing cane on 8 ha using treated effluent,'' he said.


The factory started in 1962, and would discharge untreated effluent into the Cauvery till 1978, when it installed its first treatment plant. In 1984, the factory signed an agreement with farmer societies and Ponni Sugars, its sister concern. The paper mill gave the farmers irrigation and the sugar mill provided extension support. Farmers promised to grow sugar on three-fourths of their lands, and to sell it only to the sugar mill.

"The average production on our effluent irrigated lands is 45 tonnes per acre. Ponni Sugars is paying us Rs 1,260 per tonne,'' says S Muthuswamy, president of Odapalli Pappampalayam Lift Irrigation Society. Water is let out every 10 days, based on acreage; linemen monitor usage. The Tamil Nadu Pollution Control Board has certified the factory's treated effluent meets the inland discharge water standards for the pulp and paper industry.

The Tamil Nadu Agricultural University in Coimbatore studied the impact on water and soil. "...the application of treated effluent...for cultivation of sugarcane, maize, blackgram and other crops seems to have no adverse effect on physioco-chemical and microbiological characteristics of soil and groundwater...'' said its September 2007 report.

The sugar mill is assured of 45 per cent of its requirement through the lift irrigation scheme, especially when prices increase in the market. Farmers pointed out that they have to pay a fine of Rs 10,000 per acre if they sell cane in the open market to benefit from increase in prices. No farmer has breached the contract till date, however. In turn, the company pays an incentive of Rs 30 for every tonne over and above the basic 22 tonnes (up to 52 tonnes).