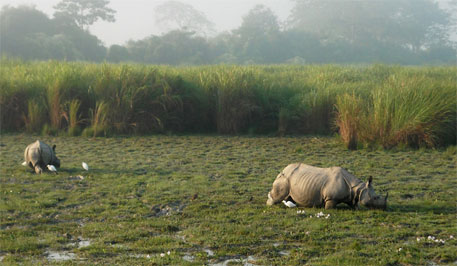 The ongoing general election in the county has become a road block for the Assam government’s plan of setting up police stations in the state to deal exclusively with wildlife crimes.

The Assam government, worried by the spurt in the instances of rhino poaching in the state and the complete failure of the state government to control it, had announced setting up of these unique police stations.

More on wildlife crimes in Kaziranga

Curse of the horn

In his announcement, made on March 1, Assam Chief Minister Tarun Gogoi had said this decision was taken after a series of talks with different senior government officials of the environment and forest department, home department, and also with the top brass of the Assam police. He had also said once these police stations are set up wildlife crimes could be brought under control.

However, on March 5 the model code of conduct came into force with the announcement of elections, and all the new projects of the government came to a stand-still.

“The detailed proposal for setting up these police stations is being prepared and will be ready soon. Once it is approved, the process of setting up of the police stations will begin,” said Gyanendra Dev Tripathi, commissioner and secretary with Assam government's home department.

Tripathi, however, added that because of the ongoing election, the process will be delayed and only after the entire election process is over, these police stations would be set up.

The chief minister, who had last year referred a number of cases of rhino poaching to CBI, said that the new police station would only be for investigating and preventing wildlife crimes in the state.

“One such police station will be set up at the Kaziranga National Park soon; they will be set up in other national parks, sanctuaries, and sensitive areas in the state as well,” said the chief minister.

“This will be a police station which will comprise of police officials and also officials from the forest department, and I strongly believe that stronger coordination among officials from both these two departments is necessary to control and investigate wildlife crimes,” said Gogoi.

The chief minister added that there will be extensive training for these officials so that they gain expertise in dealing with wildlife crimes.

According to officials of the environment and forest department, three more such police stations will be set up after Kaziranga—at the Manas National Park, the Rajiv Gandhi Orang National Park and the Pabitora Wildlife Sanctuary.

Rhino toll in 13 years: 170 and rising
According to Assam environment and forests minister, Rakibul Hussain, over 170 rhinos have been killed by poachers since 2001.

As many as 40 rhinos have been killed by poachers last year, and this makes it the highest in the last 13 years.

The failure of the Assam government in tackling rhino poaching and wildlife crimes can be guaged from the fact that as many as 11 rhinos have been killed by poachers in the first four months itself this year.

Former Assam director general of police (DGP), Jayanto Narayan Choudhury (the idea was mooted in his tenure), said these stations would be jointly manned by the Assam Police and Assam Forest Protection Force.

“We held discussions on various measures like how to build up a data base on wildlife crimes, intelligence sharing and better investigation and prosecution, taking forensic assistance to effectively deal with wildlife crimes, and after that the idea about setting up of such a police station was conceived,” said Choudhury.

The environment and forest department, and the home department will also be sending officials posted at this police station for training.

“It has also been decided that the Assam Police would impart training to “quick response teams” of Assam Forest Protection Force, and officials will also attend trainings to explore measures like fast tracking investigation and trial cases of poaching and other wildlife crimes,” said Hussain.

The environment minister also said that the authorities of the Kaziranga National Park will be opening eight new anti-poaching camps, and of these, two will be set up along Karbi Anglong and six on the chaporis (sand bars) of the river Brahmaputra.

“At present, the park has 158 anti-poaching camps, including six floating camps. Setting up of these new camps will add to the forest department’s strength and will be a big boost in our anti-poaching strategies ,” said N K Vasu, director of Kaziranga National Park.

Hussain added that once the police stations are set up, there will be exchange programmes for officials posted at these stations and they will also be provided with sophisticated equipment to be able to deal with wildlife crimes.

“These police stations will be able to curb such crimes as these will have the presence and expertise of both police officials and the forest department, and moreover, they will be working jointly to investigate and bring down wildlife crimes,” added Hussain.

Judgement: Judgement of the National Green Tribunal in the matter of Pradip Kumar Agarwalla (Proprietor of M/s Assam Brick Craft) Vs Rohit Choudhary & Ors on quarrying and mining activity in Kaziranga dated 09/05/2013