Elusive hunt for skills and jobs 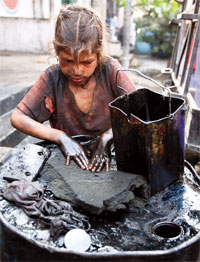 Finance minister Palaniappan Chidambaram had a rousing theme in this year’s budget: the youth. He saw them as “impatient” and “ambitious”, and he offered a number of incentives to make them the lynchpin of “inclusive development”, a theme that resonated in his speech with repeated references to what the youth are looking for. As such the budget for 2013-14 “has before it one overarching goal: to create opportunities for our youth to acquire education and skills that will get them decent jobs or self-employment that will bring them adequate incomes”.

To make this happen, the finance minister has increased funding for a range of projects and programmes that would help achieve this goal—even if the quantum of allocations was exaggerated by basing these on the revised estimates and not the actual sums earmarked in the 2012-13 budget. The allocation for the government’s flagship education programme for elementary schooling, Sarva Shiksha Abhiyan or SSA (based on the Right to Education Act) was upped from Rs 25,555 crore to Rs 27,258 crore, and for the Rashtriya Madhyamik Shiksha Abhiyan (secondary school education) from Rs 3,124 crore to Rs 3,983 crore. These will be the major components of Rs 65,867 crore allocation for the Ministry of Human Resource Development, an increase of 17 per cent over the revised estimates of the previous year.

Another Rs 1,000 crore has been earmarked for motivating the youth to voluntarily join skill development programmes. Each young person who undergoes training for a particular skill and passes the standard test set for it will be given a certificate and a reward of an average of Rs 10,000 per candidate. Chidambaram’s assumption is that 1,000,000 youth can be so motivated and thus “give an enormous boost to employability and productivity”. To this end, the National Skill Development Corporation, a public private partnership driven by industry, will be asked to set the standards.

What does all this add up to? A drop in the ocean given the scale of the problem. India’s literacy rate is just 74 per cent, which means it still has the world’s largest chunk of illiterate humanity. Worse still, those declared literate are uneducated in the basics and unemployable for the most part because of the kind of basic education that is imparted. SSA is a policy device that brings in the numbers to school but provides a cut rate education that is almost useless. It relies on “para teachers” or barely qualified people hired at abysmally low wages to teach students in the rural areas and the result is predictable.

The Annual State of Education Report (ASER) 2012 by NGO Pratham catalogues the depressing state of affairs of education in rural India. Its latest report released in January 2013 says that the poor and declining levels of reading and math at every level in 2011 had accentuated in 2012. “Fewer and fewer children in successive batches reaching third and fifth standard are learning basics of reading and math. Unless someone can show that children are learning something else better, this indicates an alarming degeneration.” Pratham found that the proportion of children in third standard who could read a first standard text was nearly 30 per cent compared with 50 per cent in 2008. Although students in third standard are expected to know two-digit subtraction, the majority in government schools cannot even recognise numbers up to 100 correctly. Ironically, the downward turn became distinctly visible after 2010, the year Right to Education came into force, emphasises ASER.

Not surprisingly, this has its impact on higher levels of education. Private consultancy Aspiring Minds, which has been publishing National Employability Reports, has identified the lack of quantitative ability as one of the primary reasons 46 per cent of Indian engineers do not qualify for a job. In its latest report, it says over 30 per cent of the engineers do not possess mathematical skills needed in day-to-day life for doing simple transactions and counting. “The competencies required for these operations involve having a basic understanding of decimals, powers, simple mathematical operations, ratio, fractions and the ability to apply these concepts to real-world problems.”

The focus on skill development is driven by the numbers who will be entering the job market in coming decades. India is on the cusp of what is called a demographic dividend, that is, when the ratio of the working population is far higher than the dependent population and thus leads to a surge in economic growth by boosting the domestic savings rate. Census projections show that the proportion of those between 15 and 59 years, that is, the working age population, will increase from 57 per cent to approximately 64 per cent by 2021. The latest Economic Survey says that in absolute numbers, it means 63.5 million new entrants will be added to the labour market between 2011 and 2016, the bulk of this increase likely to take place in the relatively younger age group of 20-35 years.

But even if the government was able to succeed in its herculean task of improving educational standards and providing the required vocational skills for the 183 million additional job-seekers who are expected to join the workforce over the next 15 years, India’s economy appears to be in no shape to provide the necessary openings. The draft 12th Plan document points out: “Agriculture cannot be expected to provide more jobs. Manufacturing must provide a large portion of the additional employment opportunities … Unless manufacturing becomes an engine of growth, providing at least 70 million additional jobs, it will be difficult for India’s growth to be inclusive.”

In fact, just a week after Chidambaram’s budget, figures from the Planning Commission show that far from adding employment, the manufacturing sector has been shedding jobs. During the five-year period from 2004-05 to 2009-10, 14.08 million jobs were lost in the agriculture sector. On the other hand, industry, which should have absorbed this, shed 5.03 million jobs, according to the just released draft 12th Plan approved by the National Development Council, the country’s apex policy making body, in December 2012. Overall, employment in the country increased only marginally from 457.46 million to 460.22 million during this period, thanks to the service sector. The draft Plan, like the Economic Survey, has called for enhanced skill development programmes and mechanisms to improve the employability of the workforce.

But there is another view that India may have missed the bus on employing large numbers in manufacturing. “We have developed based on skilled services rather than using our abundant pool of unskilled labour,” points out Arvind Subramanian, senior fellow at the Peterson Institute for International Economics and director of the India Initiative at the Center for Global Development. He told a recent seminar organised by the University of Pennsylvania’s Centre for the Advanced Study of India that East Asia and China developed by using low-skilled, abundant labour in the early phases whereas India has completely neglected that.

It is clearly too late for India to build a manufacturing sector for unskilled labour since much of manufacturing is now geared towards using high-end technology. Yet, it needs to skill 500 million people in less than 10 years. It is a mammoth task that cannot be undertaken with the woefully small sops provided by Chidambaram.