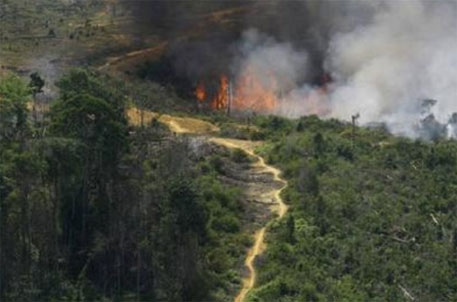 A new study shows that carbon emission from peatlands can be slowed down, reducing the release of carbon dioxide (CO2) into the atmosphere.

Drying of peatlands, sometimes due to burning and droughts, speeds up global warming. This happens when carbon stored in peatlands gets oxidised and turns into CO2, a super greenhouse gas.

Environmentalists fear that intensification of droughts can cause the stored carbon in peatlands to undergo oxidation and subsequently release CO2 and possibly methane into the atmosphere.

The study published in the journal, Nature, was carried out by US-based Duke University scientists. Peatlands are marshy lands made up of dead and decaying plant matter. They store up large amounts of carbon.

Researchers, led by Curtis J Richardson and Hongjun Wang, describe a process by which carbon emissions from peatlands can be reduced during droughts.

This can be done in two ways. The first is to plant trees and shrubs that slow down the drying process. The second method is to introduce naturally-occurring plant-based decay-retarding compounds into peatlands.

Globally, an estimated 400 million hectares of land are classified as peatlands which amounts to just three per cent of the Earth’s total land surface.

Peatlands have been formed over thousands of years and hold about 30 per cent of soil carbon. They have been classified under four categories—tropical, sub-tropical, temperate and boreal according to their geographical location.

Asia has the largest peat reserve. The global peat reserve amounts to about 250 gigatonnes in dry weight.

Till recently, scientists feared that carbon emissions from peatlands can trigger global warming. But the study shows that peatland soils have a natural adaptive technique which can lessen the drying up process and curb oxidation.

Carbon has been locked up in peatland soil for over thousands of years. Too much emission of carbon can have a tremendous impact on global temperature worldwide with peatlands turning into carbon sources rather than carbon sinks.

The study, however, mitigates this apprehension to a certain extent by describing a mechanism through which peatlands can slow down decay. This was carried out during experimentation.

While studying the 5,000-year old pocosin bog peatlands of North Carolina, researchers found that the soil contained complex plant-derived compounds that helped the land to gradually adapt to droughts.

According to the study, complex plant compounds in the soil regulate the accumulation of phenolics (a type of aromatic carbon compound) and protect the stored carbon by mitigating oxidation during short-term droughts.

Scientists also found out that the vegetation cover on peatlands is responsible for the rate of oxidation. Vegetation with low phenolic content such as sphagnum moss, ferns and sedges are not that good in mitigating carbon emissions than certain types of shrubs and trees, which are better in retarding soil decomposition.

“Our research clearly shows that the amount of phenolics is driven directly by the type of vegetation on peatlands. Many species are low in phenolic compounds (sphagnum moss, grasses, ferns) while many ericaceous shrubs and tree species found at our sites in North Carolina (wax myrtle, magnolia fetterbush and even sawgrass) in the Everglades have high phenolics which slow down decomposition,” Richardson, a professor of resource ecology at Duke University, said.

“If you denude the sites of vegetation, especially native shrubs and trees and leave it drained, then our site is invaded by ferns and grasses which have low phenolics and produce new peat that is not very resistant to decay,” the author told Down To Earth.

Human activity is also to be blamed for drying out of peatlands. In Indonesia large swathes of swamplands have been burnt to make way for palm plantations.

This poses a threat as it can liberate stored carbon into the atmosphere by means of oxidation. According to Richardson, “It is quite possible that tropical peatlands with high phenolics can resist further losses after fire, but a deep peat fire results in massive losses of carbon.”