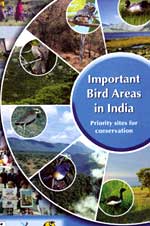 This book is certainly a magnum opus. The sheer scale of work undertaken to build this directory of important bird areas (iba) is a remarkable achievement. Consider this: over 1,000 people comprising professional and amateur ornithologists, non-governmental organisations (ngos), birdwatchers, conservationists, forest officials, photographers and volunteers worked for more than five years to give shape to this 1,150 page compendium. The volume is, in fact, the first ever attempt to list and analyse all the possible sites in India following internationally-recognised criteria for conserving birds and other biodiversity .

The book begins with a general overview of India's biodiversity and then goes on to depict a picture of the country's avifauna on a regional basis. Along with the geographical demarcations, it also marks out the threatened, endemic and restricted range species. The introductory part of the volume ends with a small note on wildlife legislation and policies.

The volume then goes on to explain the methods and objectives of the Indian chapter of the iba programme. This programme is an initiative of the BirdLife International -- a Cambridge, uk -based coalition of conservation organisations from all parts of the world. The Bombay Natural History Society [ bnhs], the publisher of this book, is BirdLife's partner designate in India. The project seeks to identify and protect a network of sites critical for bird conservation. As habitats become more threatened, this network will become increasingly important for the survival of many species. ibas are most likely to include the best examples of the species' natural habitat. Even more critically, some of these sites could be the last refuge for many rare species.

The second half of the book deals with ibas in individual states across the country. Each bird area is introduced with maps and analysis. There are tables of threatened species in each area. Besides there is also a brief description of every threatened bird, and an analysis of how their habitats are in jeopardy. In all, a total of 465 iba sites throughout the country are identified, covering almost all threatened species, quite a few restricted range species and biome-assemblages and congregatory species (mainly wetland birds) of India.

The book contains a total of 525 maps, including altitudinal maps of all sites and vegetation maps of all Indian states -- the authors have used the geographical information system technique to make the maps. The book is also packed with 450 colour plates of bird species in their respective habitats.

However, the book is not just a visual extravaganza. The study comes out with scary findings. Among them is the revelation that 198 out of the 465 ibas in India are not officially protected. But we can take some heart. For example, Ashish Kothari and Neema Pathak's essay in this volume shows how communities can protect many ibas -- that is, if they are given adequate legal sanction to do so.

This book is a treat to all nature lovers -- though its bulk does not make carrying it around an easy proposition. We hope that the bnhs keeps this in mind, when designing the book's next edition. But more importantly, we fervently hope that the organisation continues to identify, document and advocate the protection of a network of sites that are important for the long-term viability of naturally occurring bird populations. One also expects that bnhs will recommend protection of more ibas in future editions.

This volume will aid ngo s engaged in conservation. It will also be of use to officials and planners. Besides, interested lay readers will also find this work useful.

Ananda Banerjee is a Delhi-based conservationist