Are biofuels a feasible option to replacing conventional fuels? 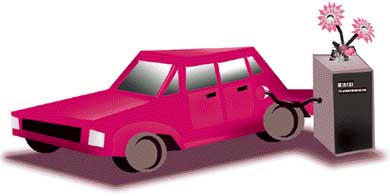 recently, a group of Kolkata-based taxi drivers did something quite unusual. They decided to tamper with the fuel in their taxis. They mixed 20 litres of diesel with one litre of mustard oil and ran their taxis on it. For them the doping made perfect economic sense. By default, researchers discovered that it reduced carbon monoxide (co) and sulphur dioxide (so2) emissions by as much as 85 per cent.

And this seemingly eerie act by the entrepreneurial taxi drivers is perfectly in line with the happening world over. Globally, researchers are looking at vegetable oils to run vehicles on. The new mantra is to use oil extracts from a wide variety of sources including neem (Azadirachta indica), mahua (Madhuca indica), mustard (Brassica campestris), castor (Ricinus communis) and karanj (Pongamia pinnata) as a blending substance for conventional fossil fuels like diesel.

The quest for these vegetable oil-based fuels had begun with the need to find newer sources of transport fuels for facing the impending crisis of fast depleting crude oil reserves. But now they are also being looked upon to further check vehicular emissions.

The most commonly used biofuels include plant oils such as soybean, sunflower and rapeseed that are blended with diesel. On the other hand, fermented sugar beets and cereals are used for making bioethanol, which is mixed in petrol. One of the most talked about biofuel option today is biodiesel -- oil derived from vegetable sources and used as a substitute for diesel. Vegetable oil can be derived from both edible and non-edible oil sources. The non-edible oils commonly used for industrial purposes are produced from linseed, castor and oilseeds of trees like neem , mahua , kusum (Carthanus oxycanthus), karanj , sal (Shorea robusta), mango (Mangifera indica) kernels, kokum (Garcinia indica) and dhupa (Simaruba glauca).

But directly using vegetable oils in conventional diesel engines can pose problems, as these oils are too viscous. Therefore, for least engine modifications and its efficient performance, vegetable oils are converted into their methyl esters so that the viscosity decreases. For doing so, vegetable oils are reacted with methyl alcohol in the presence of a catalyst.

Along with having lower viscosity, biodiesel has a high cetane number of 58, which is an indicator of fuel ignition efficiency. It also has no sulphur or aromatics. Moreover, the biofuel fraction in diesel is biodegradable, non-toxic and has high oxygen content for efficient combustion. Worldwide, a number of biofuels are being used as blends. Since India is short of edible oils like those derived from sunflower and soya, non-edible oils hold greater promise.
Extensive research is being conducted in India about biofuels, though the initial impetus for conducting the studies has come from the concern for conservation. Bangalore-based Indian Institute of Science (iisc), Indian Institute of Technology (iit) Chennai and iit -Delhi are the organisations engaged in these studies. A research being conducted since 1986 at iit -Delhi under the guidance of H B Mathur, professor emeritus, Delhi College of Engineering, reveals that vegetable oil blends of mahua, neem and linseed can be used in diesel engines in varying proportions. But the most appropriate blend is 80 per cent diesel and 20 per cent biofuel. The blending has to be done keeping in mind engine performance and exhaust emissions in respect to speed and the load of the engine.

Udipi Shrinivasa and K V Gopalakrishnan, scientists at iisc, have also investigated several vegetable oils and their derivatives for their performance as engine fuels. For better performance, they even modified the diesel engines used in the study.

But the overriding concerns of their research was fuel substitution and conservation. Consequently emission aspect was not evaluated adequately by them. Therefore, comprehensive data about the same is still not available in the country. However, Shrinivasa points out that on using pongamia as fuel for a diesel multi-utility vehicle for upto 4,000 kms, they found that emissions of nitrogen oxide (nox ) went up considerably.


Research on biofuels is being conducted in other countries as well. A study done by L G Schumacher and his colleagues at the department of agricultural engineering at the University of Missouri, Columbia, usa , shows that biodiesel emits less particulate matter, hydrocarbons (hc) and co, but more of nox . These nox emissions may be attributed to an increased combustion temperature. However, the researchers found that a 20 per cent blend of biodiesel represents a good compromise between increased nox and reduction in all other emissions (see table: Greening diesel). Biodiesel also works well with new technologies such as catalytic converters, particulate traps and exhaust gas recirculation. According to the us-based World Energy Organisation, overall ozone forming potential of hc emissions from biodiesel was nearly 50 per cent less than that of diesel.

The us National Biodiesel Board (nbb) claims that it has passed the health effects testing requirements of the us Environment Protection Agency's Clean Air Act. Those test results prove that biodiesel is non-toxic, biodegradable and free of sulphur. Experiments done by the University of California, Davis, usa, showed that the cancer-causing potential of biodiesel particulate matter is 94 per cent less than that of the diesel emissions.

Joe Jobe executive director of nbb says that blending just one per cent biofuel into diesel can also increase lubricity by upto 65 per cent. Biodiesel has already demonstrated commercial success as an oxygenated lubricity additive.

However, there are differing opinions about the health benefits of using biodiesel, as a few studies have hinted at the carcinogenic properties of some blends. For example, a study done by Jim Olsson, an associate professor at Gothenburg-based Chalmers University of Technology, has found that rapeseed oil can produce 10 times more cancer causing emissions and pollutants than diesel. This is so because the oil produces alkenes, 1,3 butadiene and benzene is 10 times more than that of Swedish Environmental class 1 diesel, which is said to be the cleanest diesel so far in the world.


There are both promises and doubts over the effectiveness of biofuels in meeting the environmental objectives. India would need to wait for more exhaustive emissions studies to be conducted to show how such a strategy could help meet air quality objectives. "Given the large potential of vegetable oil production in India its use in some regions can help to lower emissions and promote self sufficiency," feels Mathur. But there is still a long way to go before scientists can ascertain the worldwide role of biodiesel in meeting the challenges of lowering particulate emissions of conventional fuels, especially diesel.