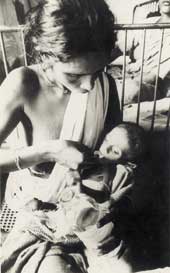 an improved formulation of oral rehydration solution (ors) has been recently approved by the World Health Organisation (who) and the United Nations Children's Fund (unicef). It is soon going to be endorsed by the Indian government. The new formulation has the same constituents as the old one -- glucose, sodium chloride, potassium and citrates. But its glucose and sodium content is much less. Due to this, the new ors is more diluted than the fluids in the body tissue and thus can be easily absorbed. This not only makes it a cure for dehydration that follows diarrhoea but for the disease itself.

Diarrhoea, a disease caused by pathogens such as Vibrio cholera or rotavirus, kills millions of people every year. The scientific community around the world felt that by increasing the ors absorption levels such deaths could be prevented. Therefore, an expert committee was set up by the who in 1994 to create sufficient scientific data for justifying the change.

Multi-centric trials wer e carried out in six countries -- Bangladesh, Brazil, India, Indonesia, Peru and Vietnam -- by various organisations including the International Centre for Diarrhoea Diseases Research, Bangladesh, Children's Hospital, Vietnam, and All India Institute of Medical Sciences (aiims), India. The trials were carried out on 147 adults suffering from cholera and 341 children suffering from cholera and diarrhoea caused by pathogens other than Vibrio cholera . Factors such as total stool output of the first 24 hours of treatment, duration of diarrhoea, need to provide the fluids intravenously and incidence of treatment failure were taken into consideration.

"The new ors reduces the period of sickness by 22 per cent and stool output by 30 per cent as compared to the old ors formulation," said M K Bhan, coordinator of Centre for Diarrheal Diseases and Nutrition Research, aiims. A statistical analysis carried out to determine the cost benefit of the revised ors showed that a total of 142 deaths per million cases of diarrhoea can be avoided if the new formulation is used. The money saved due to this would be around us $1,200 per death.