Union budget 2002-03: all the right noises, all the wrong measures 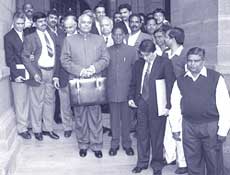 "WE are aware of the sad plight of most of our towns and cities. This needs to be changed if they have to act as engines of growth, and if they are to provide a healthy environment for our citizens. Hence, we can no longer afford to delay reforms in this sector."

Heartening words, indeed, coming from Union finance minister Yashwant Sinha in the course of his budget speech on February 28, 2002. As it turned out, Sinha was paying mere lip service to the environmental cause. In fact, the proposals presented by him have exposed his utter lack of concern for public health and the environment.

By discouraging the use of a clean fuel and propping up a carcinogen, the finance minister appears to be deliberately undermining the Supreme Court's attempts to clean up Delhi's air. He has proposed an increase, expected to be about 90 paise, in the price of compressed natural gas (CNG) by hiking the excise duty on it to 16 per cent. At the same time, diesel will now cost 50 paise less in view of the oil sector being freed from pricing and distribution controls.

This reduction is ironic because particulates - mostly from diesel fumes - claim more than 5,00,000 lives globally every year. And coming at a time when European cities such as Lombardy in Italy are actually drawing roadmaps to phase out polluting fuels, it seems the process back home is slipping into reverse gear. Sinha's move also flies in the face of his own professed concern for a 'healthy' urban environment.

The increase in CNG excise is all the more bewildering on account of the meagre returns that it will generate. According to the Centre for Science and Environment's (CSE) calculationsthe hike will result in the realisation of a paltry Rs 20 crore annually from Delhi and Mumbaithe two biggest users of CNG in the transport sector. This is in stark contrast to the health cost of air pollution in Delhi alone - estimated to be about Rs 1000 crore. Moreover, the duty on only auto CNG has been increased though the transport sector uses merely about one per cent of the total natural gas produced. The remainder that is utilised by the industry, power plants and domestic users does not carry any excise duty since it does not have to be 'compressed'. A clear signal has, therefore, emanated from the Union finance minister that he is not interested in providing incentives for the use of clean fuel or technology.

An analysis of Union budgets over the past two years (2001-2002 and 2002-2003) brings out the current dispensation's bias towards the automobile industry, even at the cost of its serious repercussions on the health (and, therefore, economic condition) of the country's citizens. As in his previous budget, Sinha once again provides massive excise concessions to private vehicles (while it has been reduced to 16 per cent on two-wheelers, excise on cars has been cut to 32 per cent). Even as the road infrastructure is making potholed progress, Indian cities are bursting at their seams and the people are gasping for fresh air, the government is promoting the use of private vehicles. Public transport, meanwhile, continues to be neglected. As against this, London city in the UK is set to slap a congestion tax to keep private cars off the roads.

As regards agriculture, it remains to be seen how effectively Sinha's prescription of permitting farmers to sell their produce anywhere in the country and even abroad is implemented. The government proposes to expand futures and forward trading to cover all agricultural commodities. Legislation like the Agricultural Produce Marketing Act is to be amended "to enable farmers to sell their products directly to potential (food) processors". Special zones will be set up in different states to encourage exports. While customs duty on pulses, tea and coffee has been hiked in a bid to protect domestic interests, fertiliser subsidies have been reduced. The minister has dubbed the measures as "freedom to the farmers", but only time will tell whether they will free drought-hit farmers from poverty and starvation.

Even as Sinha announced the continuation of the Sampoorna Grameen Rozgar Yojana, he has made no attempt in the rest of the budget to create job opportunities - particularly in rural India. For instance, natural resource management and regeneration offer major avenues in India. But instead of providing incentives to the poor and unemployed to take to natural resource regeneration, the budget gives companies and institutions a tax deduction for softwood plantations on degraded non-forestland.

Amid such grim portends, the only concession that has been made is in respect of degraded forestland being spared from the purview of this move. In this context, N C Saxena, former secretary Planning Commission, reveals that in 1998 a report prepared by a working group had recommended that degraded forestland should not be fully leased out to private entrepreneurs and that industries needing forest raw material should establish contact with farmers (see box: Expertspeak). This would give local communities an incentive to plant trees and an opportunity to work.

The Union government's shallow understanding of environmental concerns is also apparent in its sudden and unconsidered declaration that Krishi Vigyan Kendras (KVKs) will be designated as nodal agencies for quality certification of organic products, biofertilisers and biopesticides. However, this is putting the cart before the horse because in the absence of any effort to encourage sustainable farming, it is unclear how the farmer will be encouraged to produce organic products for them to appear at the KVKs for certification.

The allocation for the 'Accelerated Irrigation Benefit Programme' has been increased from Rs 2000 crore in 2001-02 to Rs 2800 crore in 2002-03. This will assist the states in expediting the completion of medium and major irrigation projects. But Sinha entirely misses out small irrigation projects in his scheme. Clearly, the finance minister has not heard of the small irrigation revolution that is spreading across the country, carrying with it the hope of relief from perpetual drought. Similarly with the cooperative movement gaining momentum in several regions, the Rs 100-crore fund for cooperative reforms is grossly inadequate even for a single state.

The budget carries a veiled threat for urban zoning and siting laws: in the guise of improving the urban environment, Sinha proposes to make it easier to sanction the use of agricultural land for non-agricultural purposes. The government seems to have got it wrong. The issue is one of keeping urban populations down by encouraging agricultural and rural livelihoods, not one of endlessly trying to meet the demand for land. Moreover, relaxing laws on the conversion of agricultural land could offer endless opportunities to the already powerful land mafia.

In the final analysis, the Union government is yet to understand the challenges facing the country. Otherwise, it would have prioritised issues such as poverty alleviation and public health instead of adopting a top-down approach to appease the industry. Nor is it aware of the strength and importance of fiscal signals in determining the future course of the country.