Enzymes that came in from the cold 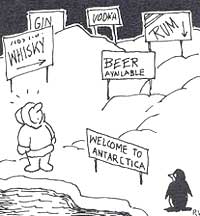 MICROBES found in the Antarctic region may soon find application in several industries, especially breweries and bakeries, which will exploit the ability of these microorganisms to produce enzymes at low temperatures. Scientists at Hyderabad's Centre for Cellular and Molecular Biology (CCMB) found these microbes produce appreciable amounts of enzymes even at room temperature. "This opens up the possibility of carrying out fermentation processes in industry without the need for heating. This will result in large energy savings," says S Shivaji of CCMB.

Shivaji, who was a member of the fourth Indian expedition to Antarctica in 1984-85, and his colleagues at CCMB have recently discovered and described a bacterial species they named Sphingobacterium antarcticus. However, most of the other microbes they studied were cold-adapted strains of species found elsewhere. "We have characterised the total inventory of microorganisms in Antarctica," explains Shivaji. "The Antarctic microbes contain special kinds of pigments that aid their adaptation to the cold," he says.

Shivaji found the microbe cell wall contained phosphorus deposits, which acted like a thermometer, signalling to the cell the temperature conditions outside, and enabling it to respond suitably.

Shivaji and his colleagues have purified some of the microbial enzymes to study their stability and catalytic activity.

The bacteria may find application also in degradation of organic wastes produced by human settlements in cold regions, like the Himalaya. And Shivaji says, "We have initiated a research programme in collaboration with the Indian army to find methods of treating wastes produced by soldiers stationed at Siachen."