Contamination of drinking water by sewage 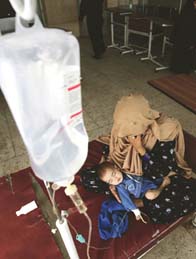 over 500 people were affected and 12 children died in an outbreak of waterborne epidemic in Landhi Town of Karachi just two weeks after a similar situation in the Essa Nagri area.

In July this year the quality control department of the city district government, Karachi had sent a report to the city Nazim (head of district level government under the new devolution plan) warning him about alarming reports of the water samples collected from different parts of the city.

Almost 90 per cent of the samples collected were tested unfit for human consumption and reports also warned about the probability of a dangerous situation during monsoon. The test confirmed mixing of drinking water with sewage water causing the outbreak of gastroenteritis. Provincial secretary health, Naushad Shaikh, confirmed that Vibrio Cholerae caused one death, while gastroenteritis is responsible for the remaining deaths.

According to Noman Ahmed, professor at ned University of Engineering and Technology, Karachi, "The water is unsafe to drink and is virtually 100 per cent contaminated containing e coli to a level unsafe for human consumption..." e coli is an intestinal pathogen and can cause typhoid and indicates sewage pollution in the water, according to Baqar Naqvi, professor at the Department of Pharmacy, University of Karachi. Government is being criticised for slow action and not taking measures to stop water supply to the affected areas, or sending water samples for tests and providing water tankers.

Kinjher, Halayjee and the Hub river are the water resources available. Karachi has only one purification plant since pre-independence times -- the cod hills treatment plant. A new purification plant recently completed at the Hub dam (80 mgd ) awaits commissioning. Meanwhile water from the Hub dam is being supplied to the city untreated.

Drinking water reaches households through a network of rusted iron pipes. Running beside these waternetworksare sewage lines. Since water supply is intermittent, vacuum areas are created and sewage from nearby choked sewage lines contaminates the water in the pipelines. Water tanker operators have taken advantage of this and have dug up wells and broken water supply lines at places. Ideally water supplied to households should be either boiled or filtered -- both rarely followed practices. This has led to a boost in the sale of small water filters and the trade of bottled mineral water.