It was India, which at last year’s climate negotiations at Durban had insisted on bringing the principle of equity back into the agenda for tackling climate change. The concept, which not so long ago had almost fallen off the climate agenda now features in almost everyone’s negotiation agenda at the mid-year climate change meeting at Bonn. The testament to its regaining relevance in climate talks was a day-long workshop on May 17 organised by United Nations Framework Convention on Climate Change (UNFCCC), exclusively devoted to debating the concept of equity.

Organised under the AWG-LCA track (a track that addresses increasing ambition by developed countries and long-term goals), the workshop aimed “to facilitate a rich interactive exchange on the issue Equitable Access to Sustainable Development (EASD), explore links to different activities under the Convention, with a view to increase understanding of EASD, which could facilitate negotiations related to a shared vision for long-term cooperative action.”

The challenge of 2oC

The workshop opened to presentations made by Sivan Kartha from the Stockholm Environment Institute and Pradipto Ghosh from TERI, familiar voices on the subject.

While Ghosh delved into the need for every hypothesis on equity to be tested against one agreed standard, Kartha expounded his approach on equity which centered around the peaking year for emissions both at the global and country levels. He explained this with a slide showing the likely incomes of developing countries in a future time period (2015-25) and those of developed countries in 2010 in purchasing power parity (PPP) units. The income of people in Indonesia and India will be onlyan eighth or ninth of those in the US or Canada even 10 years from now.

And hence, according to him, the argument must be framed in such a way that all countries must have access to the resources needed to provide a minimum standard of living should be available to all, including clean food and shelter.

But the challenge would be to contain temperature rise to 2oC, beyond which the effects of climate change become unavoidable. Everyone agrees with the science and the numbers. But achieving both at the same time would mean someone needs to foot the bill of the burden. Here, we step in to the political dimensions of the problem. This opens up the familiar problem of who’s responsible for how much so far.

According to Kartha, this difference in capacities and responsibilities can be evened out by either reducing carbon in such a way that there is enough space for everyone to develop or by providing the needed funds and technology to enable those without it to increase their resilience to climate change. As robust as these arguments may seem, in a sense, these are concepts that at least the climate negotiating world is mostly already familiar with.Most parties that made presentations toed comfortable party lines.

The US, throughout its presentation, repeated the importance of accommodating diverse perspectives on equity, emphasising that the broadest possible approach must be used. A single formula approach was not acceptable.

The EU was of the opinion that principles under the convention need to reflect the realities of the evolving world.

It also addressed internal differences within its own cluster of states and what it was doing to address this in an equitable manner, such as rewarding early movers. Australia spoke about the multi-dimensional aspect of equity. New Zealand followed suit. The views amongst most of the developing countries were more diverse, with some parties speaking elaborately on their unique national circumstances. Singapore stood out on this account. According to Ambassador Burhan Gafoor, lead negotiator for Singapore, “it being a small country meant it did not have enough space to completely transition to renewable energy options such as wind and solar and hence highly dependent on fossil fuels.” 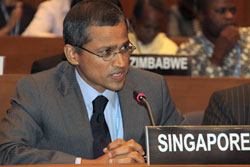 Also of concern were its early attempts at increasing energy efficiency and public transportation, which would make it harder for it to reduce emissions further in the future. These challenges, he said, will have to somehow be taken into account. Egypt spoke of its recent political revolution and its priority to address the developmental needs of a now more vocal citizenry.

Both India and China spoke about the importance for equity and Common But Differentiated Responsibilities(CBDR )to remain central to negotiations in the future, both pre- and post-2020. India, which stayed shy of presenting a specific approach, pushed for exploring the paradigm itself first. 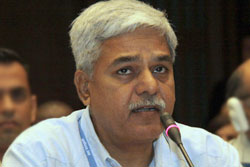 But it did although refer to the need for experts to come up with definitions of equity with norms and indicators as the debate progressed.

Christiana Figueres, executive secretary of the Convention had opened the meeting by urging everyone to look at equity as an enabler and not a barrier in taking climate change negotiations forward. But, with parties carefully maneuvering through their delicately balanced agendas developed in their home countries, the trust and the will that was needed to bring forth bold ideas was sadly missing.Many parties did refer to the need for equity to increasingly feature in future discussions, both as a standalone concept and in various other forums such as finance and technology transfer. Hopefully, time and more political will in the future will enable this principle to be an enabler and not a dampener.