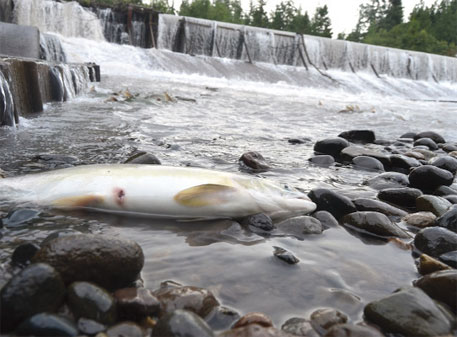 FISH have an inherent knack of swimming through most difficult of rivers, but it is a different story when it comes to navigating through dams. Although dams have structures and mechanisms to help fish find safe routes, they often prove ineffective. Hydropower dams generally have three routes of water passage—to powerhouse turbines, a spillway and a bypass constructed for fish. The first two routes are dangerous for fish and hence it is necessary to understand their behaviour at the point of route selection.

To understand this, R Andrew Goodwin from the US Army Engineer Research and Development Center in Portland and colleagues combined a computer model of the flow field at a dam with a fish behavioural model. Tracking data of the Pacific salmonids during their passage through seven dams in the Columbia and Snake river system was also used. Using these inputs, they simulated swimming orientation and speed of fish in response to water acceleration and pressure caused by depth.

“We found that we could reproduce key patterns of fish movement and passage through large dams, not just for one or two dams but for many dams on the Columbia and Snake Rivers,” says Goodwin, lead author of the study. “We also found that by assuming fish judge their world in a way that is not static, but changes with time, we could reproduce patterns where fish reject a safe route initially but return later and use it,” he says.

The findings indicate that a fish’s perception of the water flow patterns in the dam and changes in the patterns determine its navigation route. Goodwin says the finding is significant because it presents a general sense of how the water flow field may “shape” fish movement trajectories near a dam. “If fish movement is primarily dependent on water hydraulics (flow patterns, speed) near a dam, then our findings suggest how we may be able to reproduce the ‘guidance’ of fish at other locations,” explains Goodwin. He adds, “Regarding dam designs, it is important to include structures such as trash booms (floating devices to direct trash and debris away from the powerhouse turbine intakes) and guidance walls that can effectively guide fish into the routes engineered for their safe travel around a dam. This is a challenge because behaviour differs with species, multiple stimuli are usually at play, and the environment in which fish live is moving rapidly. We need to better understand the conditions under which fish can be ‘guided’.”

The study was published online on March 24 in the Proceedings of the National Academy of Sciences.

In a case study submitted to the Food and Agriculture Organization, Parineeta Dandekar, associate director at the New Delhi-based South Asia Network on Dams, Rivers and People, says the construction of the Farraka Barrage in West Bengal has had a huge impact on the hilsa. “Prior to Farakka, the fish migrated from the Bay of Bengal to Allahabad. Post Farraka, the yield of hilsa dropped from 91 kg/km in 1960s to near zero in 2006 in Allahabad.”

Dandekar also throws light on the status of mahseer in India. She says mahseer fisheries have collapsed in Madhya Pradesh after fish migration routes were blocked by Bargi and Tawa dams. The state once had the best mahseer in India, she says.