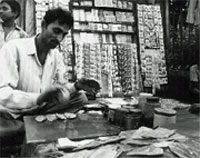 if the health ministry has its way, you may no longer be able to chew your favourite pan masala. As the health ministry ponders over a recommendation to ban the production and sale of all chewable tobacco products, the Rs 1400-crore " pan-zarda-gutka " industry has gone into a tizzy. The industry says that the ban would mean a loss of millions of rupees in revenue and jobs to tobacco farmers and workers. "Imposing such a ban would require a great deal of caution and a 'political will'," says a ministry official.

However, the ministry has yet to make a proposal to ban chewing tobacco. While parleys are on, the Industry is lobbying hard to stall it. Meanwhile, health activists -- who have been pushing for ban for over a decade -- say the ministry must go for a total ban.

The Central Committee on Food Standards ( ccfs ), set up by the government, recommended a countrywide ban on chewing tobacco. It has collected scientific evidence that links chewing tobacco with oral cancer and other complications. The committee found that pan masala , (a mix of betel nut, catechu, lime, cardamom, flavouring agents and tobacco), zarda (flavoured tobacco balls or flakes) and gutka (poor man's pan masala ), cause hardening of the fibrous tissue of the mouth (fibrosis), and cancer of the mouth.

Oral cancer is one of the most prevalent types of the deadly malignancy in India. "Nearly 30-40 per cent of the cancer patients in our hospital are cases of oral cancer," says A K Chaturvedi, head of radiology department, Rajiv Gandhi Cancer Institute, New Delhi. "Consumption of chewing tobacco has been the major factor for inducing oral cancer in patients," he adds.

A scientific review of the Indian Council of Medical Research ( icmr ), New Delhi, has associated the consumption of chewing tobacco with oral cancer. This review was discussed in the ccfs . The committee's recommendation stems from an advice by the Expert Group on the Adverse Effects of Chewing Tobacco. Kishore Chaudhury, a scientist who represented icmr in the Expert Group, says that the review may be published within three months.

Health ministry officials say that the committee has also taken into account various studies such as the one by the National Institute of Nutrition, Hyderabad, Regional Cancer Centre ( rcc ), Thiruvananthapuram and Gujarat Cancer Research Institute, Ahmedabad. "Nearly 60-85 per cent of oral cancer cases could be caused due to the consumption of chewing tobacco. In the early 1990s, out of 6,44,600 cancer patients in India, there were nearly 63,200 patients suffering from oral cancer," points out an icmr scientist.

Tobacco chewing, a risk-fraught countrywide pastime, is a major cause for cancer. M Krishna Nair, director of rcc , told Down To Earth in a recent interview: "Nearly 50 per cent of the cancer cases among men and 18 per cent cases in women in Kerala are due to tobacco consumption."

An icmr official says that it may take about 15 to 20 years to prove beyond doubt whether consumption of any particular type of chewing tobacco increases the incidence of cancer or not. "Tobacco is already known for its adverse affects on health, so it should be banned at the earliest," he says.

Similar efforts by the governments of Andhra Pradesh, Goa, Gujarat, and Maharashtra to "discourage, restrict and minimise" the use of chewing tobacco have not borne fruit, notes the report of the expert group. So they favour a total ban. But health ministry officials also acknowledge that any ban might backfire. Recently an alcohol ban in Haryana had to be lifted due unforeseen outcomes. Health ministry officials keep their fingers crossed.