Everything’s in a name 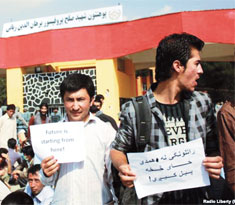 Public tributes to Afghanistan’s national heroes are apparent to any traveller driving through the country’s capital, where streets, squares and schools have been renamed to honour the dead. But deciding who is a national hero has proved contentious due to conflicts among ethnic, religious and political groups. Each has its own interpretation of the country’s bloody history, and a figure idolised by one side is likely to be abhorred by another.

The latest controversy has erupted after president Hamid Karzai ordered renaming of the Education and Training University after former president Burhanuddin Rabbani. Rabbani’s ethnic Tajik forces were involved in bloody battles with rival mujahedeen after the Communist regime toppled in 1992. Later appointed by Karzai as his peace negotiator with the Taliban, Rabbani was assassinated last year. Protesting students say they do not want to study under Rabbani’s name as he was accused of human rights abuses during the civil war. Several prominent Afghan lawmakers are backing the protests.