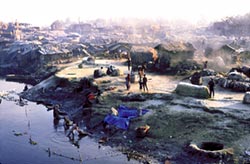 The Delhi High Court (HC) has directed the Union and state governments to remove all illegal encroachments, including places of worship, from the banks of Yamuna river within the next two months. The concerned authorities have been asked to file a compliance report by May 14. The order was passed on a petition that raised the issue of illegal encroachment of government land by slum dwellers.

The HC observed that the dumping of dangerous medical waste and discharge of unhygienic material had polluted the Yamuna. Today the river's embankment is chock-a-block with concrete houses and even places of worship, it noted. The court criticised the government for the slow pace of resettling slum dwellers in new colonies. It calculated that at the current rate it would take another 272 years to complete the rehabilitation process.