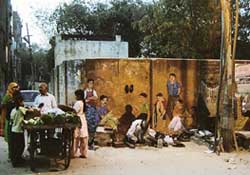 "Packing up and leaving from Nangla has begun," reads a recent entry in the e-diary maintained by Ankur, a Delhi-based ngo, and Sarai, the new media and urban culture programme of the Centre for the Study of Developing Societies, Delhi. Nangla -- Nangla Machi actually -- is a squatter settlement near Pragati Maidan in Central Delhi, where the two organisations had started a cybermohalla ( online community), two years ago.

The project used digital media to articulate aspirations of youngsters from slum colonies. e -diaries, personal memories and testimonies became a method to register the world of people from squatter colonies, and reflect on its complexities. Several other media forms emerged from the diaries: a book, By Lanes, a set of 10 booklets, postcards and a cd that the practitioners call the Book Box, a batch of stickers with statements culled from diary entries, and monthly wall magazines. But now Nangla Machi has become prime property. It has to be sanitised: the squatters have to be evicted as per a recent Supreme Court order. The cybermohalla practitioners also have to pack their bags and leave.

"The police have arrived, in huge strength, in protective gear and with water canons. Close to 40 tempos stood along the Ring Road, some shared, some hired by a single family, to pack and leave. The cost of hiring tempos has become prohibitive today," reads another entry in the cybermohalla blog, http://nangla. freeflux.net/. The diary has now become a record of the violence of dislocation.