Evolution: a one way street 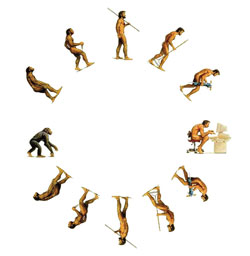 WHAT is the difference between a fish without bones and a fish with bones? Biologists would say more than 40 million years of evolution and numerous mutations. Scientists have been curious since the British naturalist Charles Darwin proposed the theory of evolution. They subsequently established that accumulation of mutations in the DNA over millions of years results in a new life form. But a question has intrigued many: is evolution reversible? Conventional wisdom says no. Eminent dinosaur researcher Louis Dollo in the late 19th century said as evolution occurs, the changes are so intricate that it becomes nearly impossible for an organism to go back to its ancestral form. Dollo’s theory has remained mostly unchallenged, barring a few instances. In 2003, some researchers said a species of snail regained its ability to coil into a loop after having lost the trait in previous generations. “But their methods are notoriously unreliable and the merits of those claims are questionable,” said Boris Igic, biologist at the University of Illinois at Chicago. A recent study published in the September 24 issue of the journal Nature has confirmed Dollo’s theory stating evolution is a one-way street. The group of scientists from University of Oregon and Emory University School of Medicine in the US studied for the first time the evolutionary process at the molecular level. The problem is the evolutionary process takes millions of years, which makes it difficult for scientists with their limited lifespan to make any direct observation. Hence, Jamie Bridgham, Eric Ortlund and Joseph Thornton went around the problem by studying the evolution of a protein, glucocorticoid receptor. The receptor binds to the hormone cortisol and regulates stress response, immunity, metabolism and behaviour in humans and other vertebrates. The scientists had earlier worked on this protein and recreated it the way it existed in boneless fish, the ancestor of all life forms on earth. They resurrected the protein using computer and molecular biology techniques. The glutocorticoid receptor in the boneless fish was markedly different from its bony form; it could bind with hormones, aldesterol, deoxycorticosterone and, to some extent, cortisol. During the 40 million years of its evolution into bony fish, the receptor underwent 37 changes which made it specifically sensitive to cortisol. The key differences between the two proteins lay in seven changes in their sequences. The team of scientists led by Bridgham, evolutionary biologist at Oregon university, made the changes to revert the receptor to its ancient state. “To our surprise, we got a dead receptor,” said Thornton, biologist at Oregon university. The scientists examined the protein at the genetic level and identified five mutations that conferred no genetic advantages, but acted as brakes and did not allow the reversal of evolution. Once the scientists fixed these five, manually, they found that the changes to seven key protein sequences worked and the new protein reverted to the ancient form. Bridgham and his team called these five mutations ratchets; they prevented reverse evolution. This means even if in theory the glutocorticoid receptor could go back to the ancient genetic makeup, the ratchets would not allow the earlier function to be resumed. “This is not to say the ancestral function cannot be acquired again,” said Igic. But the function will come from forward evolution rather than a reversal. When whales evolved from a fourlegged terrestrial ancestor, Igic said, they reacquired the ability to swim by independently gaining fins. It was a reversal in function towards its ancestor, but in biochemistry, it was a forward movement, he said. Thornton did not see the failure of the protein, glutocorticoid receptor, to go back to its ancient form as a one-off case. However, many more studies with other proteins will have to follow before definitive conclusions can be drawn, he said. “Everything that makes us who we are is stored in DNA. Changes at the macroscopic scale have to start at the molecular level. This is going to open up scope for further research,” said Ortlund, professor of biochemistry at Emory university. Ã”Ã»Ã¡ 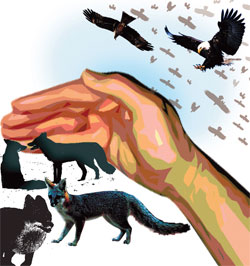 RABBITS are taking over Macquarie Island near Antarctica. An introduced species, they went out of control after invasive feral cats were removed from the island. The cats fed on the rabbits. The cats were introduced to control rats that had flooded the island in the 1800s. But these ad hoc methods to control invasives did not work. Removal of invasive species need to follow an order and ecological concepts of food webs and models must be used, said researchers in the US. They were talking from the results of their study of the Santa Cruz island off the California coast. Foxes declined in the 1990s because of increased predation by golden eagles, which had started getting invasive. But foxes weren’t the reason the golden eagles came to the island. The eagles got attracted to the large number of pigs, introduced to the island earlier. Although the eagles preferred pigs to foxes, the fox population was complimentary. The researchers analyzed food debris in the nest of five pairs of eagles. Foxes constituted 17.5 per cent of one of the pairs’ diet. They named the pair Laguna. The others were happy with mostly pigs. The researchers, using simulations, found if pigs were removed there was a good chance the eagles would turn to eating more foxes. They planned to capture eagles and pigs simultaneously. This proved successful: the fox population doubled to 268 between 2001 and 2006. But the researchers could not catch the Laguna pair. They found that half the diet of the pair now included foxes. The pig-eviction drive was responsible for this, they concluded. The researchers explored three reasons that could have led to the change in the Laguna pair’s diet, but later ruled them out. One possibility was with the eagles removed, the foxes became less wary of the ones that remained. The study found foxes had in fact become more wary of eagles and changed their everyday behaviour to avoid them. The second reason was there were more foxes to hunt. But the researchers found the pig population was removed rather fast leaving the remaining eagles with little choice. The third possibility was the Laguna pair had access to new areas of the island but this seemed unlikely because even when other eagles were present the pair preferred foxes, said the study published in the September 14 issue of PloS One. A captive breeding programme has to an extend restored the fox population. Ã”Ã»Ã¡ 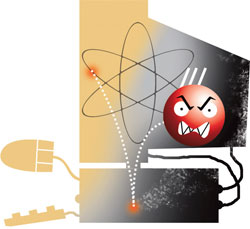 When they are restless, materials age faster

HOW do computers grow old with time? Why does the car refuse to start? The answer, say scientists from Vienna, lies in atoms that can get pretty much wild. The behaviour of atoms has come to light for the first time by the use of cutting edge technology that uses X-ray sources called electron synchrotrons. The scientists term the behaviour wild because the atoms are restless and they jump within a solid. The restless atoms are responsible for ageing, and therefore, loss of specific material properties. The research team used the European Synchrotron Radiation Facility in France, which creates special X-rays of exceptional intensity and quality. They observed the movement of atoms in a copper-gold alloy and discovered how far and in what directions atoms jumped and how temperature affected their movement. The temperature where atoms start hopping depends on the material. They found at 270°C, atoms of the alloy changed position about once per hour. If the temperature was increased by 10°C, the jump rate doubled. It halved when the temperature was decreased 10°C, said Michael Leitner, of the research team, in the study published online in Nature Materials on July 26, 2009. “The only way to stop atoms from jumping would be to lower the temperature,” said Leitner. One could also modify the material and observe the movement. Take for instance aluminium, said Leitner, which is rather soft. “Anyone who has crushed a beer can knows that. When mixed with copper and other elements, and kept at a given high temperature, aluminium is much harder.” Does that mean it will last forever? “The initial heat treatment makes the material hard, but subsequent high temperatures make it soft. We need to know more about atomic diffusion to understand what goes on,” he said. The team is doing this by finding ways to enhance the quality of X-rays further. Ã”Ã»Ã¡