Are exercises like brisk walking and cycling safe for people suffering from acute hypertension? Yes, says a recent study. High blood pressure and the amounts of medicine used to treat it can both be reduced with moderate exercising on a regular basis 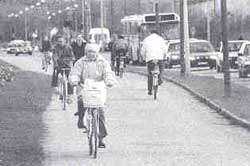 ALTHOUGH the significance of Tegular exercising in low~ring blood pressure in persons with mild to moderate hyper- tension has been established by earlier studies, its relevance in relieving very severe hypertension has only recently been emphasised. Researchers at the 'Veterans Affairs Medical Centre in Washington in the us conducted studies to investigate the exact relation- ship-between exercise and severe hyper- tension. The first of these focussed on African-Americans and conclusions drawn revealed that people belonging to this group were quite prone to hyper- tension. An apparent genetic predispo- Sition to the disease is hightened by factors like improper diet, high level of salt intake, stress, poor medical care and the lack of regular exercise among adults of this group. A team led by Peter F Kokkinos tested the impact of exercise on 46 black men, whose blood pressure was higher than 180 over 110. Blood pressure is considered elevated if it is more than about 140 over 90.

Researchers found that exercise eases one of the most dangerous com- plicatiOns of severe hypertension, enlargement of the heart. This condi- tion is caused by excessive pressure on the organ. They found that this condi - tion called the left ventricular hypertro- phy, was greatly minimised after just i6 weeks of working out. This change was, however, not observed in those who did not exercise.

The finding that exercise can reduce the need for medication is "new and particularly significant", says William L Haskell, a hypertension expert at the us-based Stanford University Medical School. " A lot of medication can bring down blood pressure, but it often pro- duces side effects, such as the perceived suppression of energy and libido", says Haskell. However, researchers caution that persons suffering from very severe hypertension should avoid weight- lifting and resistance exercising invol- ving the arms because it can result in dangerous increases in their blood pressure levels.

So the message is clear: ifhigh blood pressure is brought under control with scaled down doses of medication, the patients not only save costs but enjoy a better quality of life.