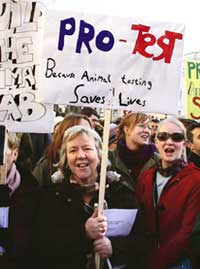 More than thousand people, mainly students and researchers, took to the streets of Oxford, uk, to participate in a rally on February 25, 2006. Some marched in support of building Oxford University's biomedical research laboratory and against harassment by animal rights activists, while a counter protest opposed the lab construction.

Pro-lab protesters complained of physical attacks and said their homes had been attacked by animal rights activists. They said the violence was stifling the debate on the use of animals in scientific research. This is the first time that researchers have come together against animal rights groups.

Earlier, the animal rights groups had targeted other prominent laboratories like Huntingdon Research Centre in Cambridgeshire. The pro-animal testers say animal research is more than "putting shampoo in rabbits' eyes".