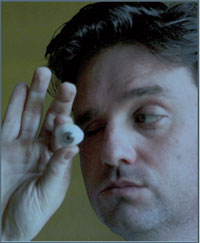 Canadian filmmaker Rob Spence is preparing to work with a video camera concealed inside a prosthetic eye, hoping to secretly record people for a project commenting on the global spread of surveillance cameras. Spence’s eye was damaged in a childhood shooting accident and it was removed three years ago. With the camera tucked inside a prosthetic eye, Spence plans to become a human surveillance machine to explore if people are sleepwalking into an Orwellian society. “In Toronto there are 12,000 cameras. But the strange thing I discovered was that people don’t care about the surveillance cameras, they were actually more concerned about me and my secret camera eye because they feel that is a worse invasion of their privacy.” Spence’s special equipment will consist of a camera, originally designed for examination of medical study of colons, a battery and a wireless transmitter. It’s a challenge to get everything to fit inside the prosthetic eye, but Spence has had help from top engineers, including Steve Mann, who co-founded the wearable computers research group at MIT in the US.