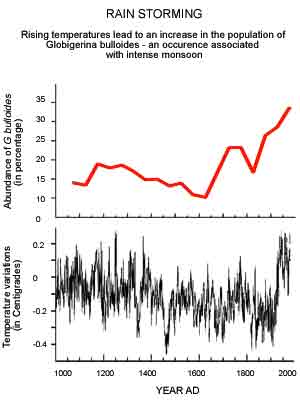 scientists in India are baffled by a new study which states that Southwest Asian monsoon has become stronger over the past four centuries and it might continue to intensify as a result of global warming. The findings of the study seem to be ironic, considering the fact that due to monsoon failure two-thirds of India is reeling under drought this year. Experts say that even if the study holds water, in no way does it mean good news. According to them, extreme weather conditions such as intense rainfall, which at present is only a very region specific phenomenon, only implies severe floods and devastating erosion.

The study was conducted by David M Anderson of the us National Oceanic and Atmospheric Administration, Jonathan Overpeck from the University of Arizona, usa, and Anil Gupta from the Indian Institute of Technology, Kharagpur, India. To establish a long-term monsoon record, the researchers turned to tiny fossilised planktons called Globigerina bulloides that are found abundantly in the Arabian Sea. Winds blowing along India's western coast during the monsoon cause the sea to swell, which dramatically increases the abundance of G bulloides. Therefore, the stronger the monsoon, the more the G bulloides. Over a period of time, a unique fossil record of the species has built up in the sediment layers of the sea floor.

To reconstruct the monsoon, the scientists looked at the abundance of G bulloides in the sediment layers. They extracted a sediment core from the bottom of the sea and studied the number of G bulloides in each two-millimetre slice, after dating them with radiocarbon techniques. The results provided valuable data on wind speeds during the summer southwest Asian monsoon dating back to more than 1,000 years.

The investigators discovered that during periods of known climate cooling, there were fewer G bulloides fossils in sediment slices that corresponded to those periods. And there were more fossilised plankton found in sediment slices corresponding to periods of known climate warming, including the past 400 years. "We have seen a substantial century-to-century variation of these fossil layers," said Anderson. The sediments showed the monsoons to be weaker during the 1600 ad, when a period of cooling in Europe known as the Little Ice Age is believed to have occurred. On the other hand, between 1200 ad and 1400 ad, the monsoon was found to be strong.

According to David Black, an assistant professor at the University of Akron in Ohio, usa, the study is very significant as prior to it no one had any real understanding of how the monsoon system varied on short time scales.

However, Indian experts do not agree with this assertion. "Global warming is a big basket. But it is not correct to blame it for everything. Monsoon is a very robust system. Analysis of the past 125 years of Indian monsoon data reveals no significant trend," says M Rajeevan, director of long-range forecasting of Indian Meteorological Department (imd), Pune. During these years, monsoon has either been weak or normal, says H R Hatwar, director of Delhi-based Northern Hemisphere Exchange Centre of imd." Increase in the intensity of monsoon has been region specific. Moreover, it has resulted in large-scale devastation, like the way it is in Bihar at present," adds Hatwar. According to Murari Lal, chief scientist of the department of atmospheric sciences at the Indian Institute of Technology, Delhi, the present weather conditions are evidence that the findings are baseless. He asserts that such studies are carried out to hand twist the developing countries.