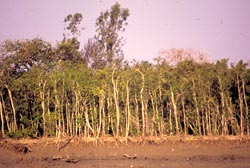 the Bangladesh government is considering felling a large number of disease-ridden Sundari (Heritiera fomes) trees in the Sundarbans -- the world's largest mangrove forest. The infectious 'top dying disease' -- which attacks plants from the top, giving them a leafless and bald-headed look -- has afflicted nearly 7 per cent of these trees, and the government aims to check its spread. But biodiversity experts warn that the action could adversely affect the health of the forest. Besides, it is feared that corrupt forest officials might encourage chopping down of healthy trees under the guise of the weeding out operation.

Sundari trees comprise at least 72 per cent of the Sundarbans' 6017-kilometre stretch that lies in Bangladesh. The Sundarbans is the country's lone world natural heritage site. It is under threat from increasing salinity in its rivers and canals due to lack of water. The top dying disease is also believed to have been caused by this problem. Experts say trees in the western region are the worst hit due to high salinity in Shibsa river.

On March 13, an expert committee of the country's environment and forest ministry recommended cutting down those trees in which 50 per cent of the canopy was infected. According to sources, the ministry will table the proposal for approval at the next cabinet committee meeting. Environment and forest minister Shahjahan Siraj told Down To Earth that the felling was urgently required, as the diseased trees could affect the healthy ones. But this would be done on the basis of the expert committee's suggestions only, he added.

Abdur Rahman, a committee member and director of the Centre for Integrated Studies on the Sundarbans, was quoted as saying that if the exercise wasn't carried out, the government "will lose a good amount of revenue". But biodiversity experts oppose this view. "Those recommending felling should be concerned about the health of the forest rather than revenue loss," points out an expert. A forest official, too, concurs: "As most of the canopy of Sundari trees will be removed, the shadow plant species will also disappear and parts of the forest will become barren. But we cannot say anything as some of our top officials are supporting felling."

Ainun Nishat, country director of the World Conservation Union (iucn), said if the Bangladesh government does decide to fell trees, the civil society should be involved in the selection, harvesting and marketing processes. Some experts and officials also feel that the decision should be accompanied by clear guidelines, and would require strict vigilance at the time of implementation. "The department cut down dead Sundari trees in 1994. But some officials made a huge amount of money by felling healthy trees as well. The same people are holding key posts now," alleged a senior forest official on the condition of anonymity.

Meanwhile, environmentalists are worried about forest fires and encroachment of forestland too. Recently, more than 4000 trees were gutted in a major fire in the eastern wing of the forest division. What has also raised eyebrows is the fact that despite the forest's poor health, a census earlier this year suggested an increase in its tiger population.