How prepared is Bihar? 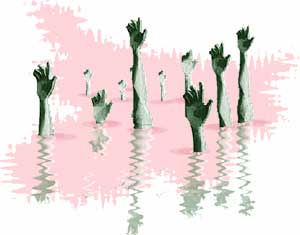 • flood-prone: Eight rivers that have their catchments in Nepal carry a huge quantity of water and sediments to Bihar. The state's flood-prone area increased from 2,500,000 hectares (ha) in 1954 to 6,881,000 ha in 1994 . 941,000 ha remain waterlogged. Nearly 81 per cent of the population in these areas depends on agriculture. About 20 districts are highly flood-prone, including around 76 per cent of north Bihar. Access to these districts is blocked during floods. Roads leading from south to north face maximum damage; nh 31 and nh 77 are cases in point

• major loss: In 2004, nearly 2,250,000 people suffered floods for two-and-a-half months. By August 2004, 725 people had drowned and five died in police firing while demanding proper flood relief. Government says crops worth Rs 419 crore, over 1,400,000 ha land, and houses worth Rs 717 crore were destroyed . But in its report "India Flood 2004", non-governmental organisation Action Aid alleges that the government's estimate of the loss is extremely watered down

• no account: Last year, Rs 189 crore was distributed among flood-hit districts. The state's Disaster Management Department (dmd) has been asking the districts for their statements of expenditure since July 26, 2004, in vain. dmd's similar requests to various government departments have also not been met. In 2005, Rs 1,800 crore was demanded for various flood control schemes; Rs 86 crore has been approved for 322 works

• houses: Nearly 900,000 houses were washed away in 2004. The state government formulated a Rs 1,375-crore, two-year plan to construct houses under the Indira Awas Yojana . The prime minister provided another Rs 410 crore and Rs 228 crore came from the Calamity Relief Fund. But only five per cent of the houses have been built . The government has now decided to make 5,000 flood relief camps, costing another Rs 750 crore. The construction of helipads at various places is also in the pipeline

• embankments: By March 2002, existing embankments could protect just 2,928,000 ha. While there has been no addition in the embankment length in the past 12 years, existing embankments are crumbling down. Of the 322 spots to be repaired, work has finished at only 131. In June 2005, the Central Task Force gave Rs 34 crore to repair embankments . Government proposes making roads over embankments to increase their durability. No rehabilitation plan exists for those who would be evicted

• food: The government has no estimate of the amount needed for flood relief. A request of the state's Food and Supplies Department for this information was totally ignored by district authorities. The Food Corporation of India's 41 godowns in Bihar can store only 350,000 tonnes foodgrain

• boat industry in shambles: The dmd says 15,000 boats are needed during floods. The supply is just half. 7,840 boats, 6,641 privately run, were employed in 2004. But the government hasn't purchased boats for the past 15 years. It has neither got damaged boats repaired, nor new ones constructed. Its officials allegedly take boats from fisherfolk forcibly, at arbitrary rents

Utility of boats beyond flood relief is fast declining. Boat industry workers are shifting to brick-kiln factories. Earlier, 300-350 boats were annually built in the Patna City-Phatuha belt; now the number is barely 30. Even these don't get buyers

The government owes Rs 1.43 crore in boat rents and wages of boatmen for the past nine years. As a result, it now has problems getting boats on hire