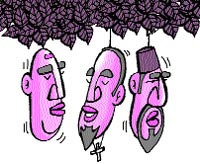 Milan, Italy Religion and the Environment

The May 1967 issue of the journal Science carried an article by the American historian, Lynn White Jr. Entitled 'The Historical Roots of our Present Ecological Crisis': it caused quite an uproar in the Christian church. The reason: White had traced ecological degradation to the Judeo-Christian belief which regards humankind as distinct from the environment. She had argued that by destroying pagan animism, Christianity had paved the way for Western civilisation to exploit nature with utter indifference to ecology. The article also led to a debate in academia over links between religion and ecology. The issue was again argued over at the 18th annual Sant'Egidio interfaith peace conference held in Milan between September 5 and 7. Religious leaders, academics, representatives of some non-government organisations and governments participated. Antje Heider Rottwilm, a pastor of the German Evangelist Church, set the ball rolling by arguing "It is quite obvious that the world's major religions have not done enough to arrest ecological destruction." It was a lively discussion and not all participants were willing to fault religions for ecological problems. For example, Daniele Bassi, professor at the University of Milan, argued that "it is better to return to the Judeo-Christian tradition of the prophesy of Abraham." (The prophesy enjoins upon Jews and Christians to regard the environment as their home and take good care of it.) "This is quite in contrast with a number of conservationists who reduce the ecological question to one of nature defending itself against humankind," contended Bassi. "Such positions are quite akin to neo-Malthusian theses of ecological catastrophes caused by rising human demands and they deny the poor opportunities for betterment," the Italian professor argued. Other participants also stressed that different religions such as Hinduism, Buddhism and Islam have tenets that could stem the world's current's ecological crises. However, this is quite akin to going back to the pristine religious tenets. An alternative would have been to show how religious scruples still guide communities, in many parts of the world, to manage nature sustainabily. Ultimately the final word lay with Rotwilm, who argued that major religions need to reform themselves if they have to guide their adherents about imminent ecological needs.