Most fossils, repositories of early life on Earth, may not be fossils at all. Existing evolutionary theories stand to lose ground 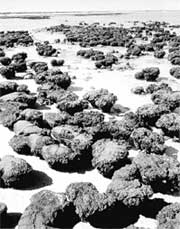 stromatolites, considered to be the most abundant fossils in rocks representing the first two to three billion years of Earth's history, may not be fossils at all. Instead, they could very well be just fossil-like structures, as revealed by the recent findings of John Grotzinger and Daniel Rothman of the Massachusetts Institute of Technology, us. The two researchers have concluded that morphogenesis (development of physical characters) of stromatolites could be entirely abiotic (non-living) in origin (Nature, Vol 383, No 6599). Therefore, if such fossils are studied, they could lead to formulation of wrong evolutionary concepts.

The discovery of a 3.5 billion-year-old stromatolite from Australia had assumed prominence as part of the evidence of earliest life on Earth. But the extent to which they are biogenic -- produced by living organisms -- is now a matter of continuing controversy, as evidence suggests that non-biological processes also contribute to formation of similar structures. Grotzinger and Rothman showed that such structures can form by a combination of chemical precipitation of calcium carbonate onto a surface and the settling of fine sediments on the shore.

They used a computer simulation of these formative processes which generated layered structures that looked just like stromatolites. They concluded that, theoretically, abiotic processes can generate stromatolites, and in the absence of microfossils within them, it may be impossible to prove their biological origins. Although this does not rule out a biological origin for many of the rocks, the researchers note that very few stromatolites contain fossil algal cells. So, most of the rocks regarded as remnants of early life on Earth might not, after all, be fossils.

Nonetheless, Grotzinger and Rothman do not disagree completely with the proposition that there are good reasons for thinking that most stromatolites are biogenic. Firstly, there are examples which indicate that microfossils might be responsible for the construction of layers of stromatolites. Secondly, Grotzinger himself has shown that the distribution of stromatolite-dominated carbonate sedimentary rocks in the Proterozoic (Pre-Cambrian) era, 2,500 million years ago, matches that of the algal and coral dominated equivalents in the Phanerozoic (Cambrian) era, 544 million years ago, reflecting comparable biological influences. Finally, there are numerous stromatolites where biological influences in their morphogenesis can be directly observed. It follows from their analysis that we need to take a fresh look at the processes of development of stromatolites to seek more convincing measures of biological origin than are currently available.