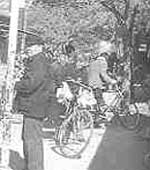 CABBAGE, once the favourite winter vegetable of the Chinese is seeing hard times. The ultimate insult has been heaped on it - it is being ignored and the new Chinese preferences include vegetables like spinach, broccoli, brinjal, cauliflower, tomatoes and garlic shoots.

Earlier, winters meant cabbages being bought for the wholeseason. As much as 450 kg per family was reverently soaked in vats of water Or hung on clothes lines or even stacked in the cool of the doorways. 'the choice of many for its cheap price, cabbage was used for SOUPS, rice dishes and added to dumplings. No longer, however. As living standards increase and more green- houses make their appearance, Chinese tastes have evolved into more exotic flavours like meat and dairy products. The leafy vegetable is now relegate being used for side dishes, if at all, I r 1950s and 1960s, cabbage creativitv at its peak as meat, fish and other etables were hardly available.

In China's inflationary economy however, cabbage still remains a bargain at 11.5 us cents for half a kilogram.