What will prevail? Crystalline PV or thin-film

Since 2008, there has been a drastic drop in prices of silicon-based solar modules and the material needed to produce it. This has now come to a point where there is a major shake-up in the solar manufacturing industry, and end-users are benefiting by way of cheaper solar electricity.

Over the past decade, spot prices of solar-grade silicon rose sharply from US $30 a kg in 2001 to a peak of $450 a kg in early 2008 because of higher demand potential and a production base that could not match up. In late 2008, the prices of crystalline modules started falling rapidly, owing partly to better manufacturing technology, economy of scale and the entry of fully integrated Chinese manufacturers into the market (see 'Falling PV prices' and 'Poly-silicon prices'). 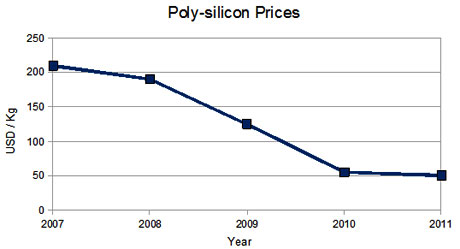 Even more so, the drop in price is because the economic crisis suddenly created a heavy over-supply as European and US growth of PV demand slackened. This over-supply has been squeezing the profit-margins of Crystalline PV manufacturers as they compete for a smaller market pie.

This fall in Crystalline PV prices has, in turn, forced producers of thin-film PV to follow suit and lower prices even further as their technology is not as efficient at converting sunlight's energy to electricity (see 'Compare price and efficiency of solar PV panel'). Thin-film is however less affected than crystalline in warmer climates, as high temperatures lower a solar module's efficiency.

Chetan Singh, professor at IIT-Bombay's National Centre for Photovoltaic Research and Education states that there is no easy way of determining what technology will be most productive in the end as environmental conditions have a large impact on end results. Other factors impacting price could be that thin-films need more land and the quality of panels degrade over time.

Professor Singh says both thin-film and Crystalline PV have room for improvement in efficiency and manufacturers are investing heavily in research and development to get the edge.

Globally, a shake-up among manufacturers is ongoing as the large US thin-film manufacturer Solyndra went bankrupt early this month. Solyndra also joins earlier bankruptcies of US Crystalline manufacturers, EvergreenSolar and SpectraWatt. Companies are blaming high labour costs in the US and competition from state-sponsored Chinese firms.

The drop in PV market prices has impacted the market for a third type of solar technology not based on PV, called concentrated solar power (CSP) as well. CSP technology uses the heat from the sun, concentrated through mirrors to heat a liquid medium that transfers heat to produce steam which drives a turbo-generator for generating electricity. CSP can be a competitor to both thin-film and Crystalline Solar PV as during bidding, contracts will be awarded to the developer that provides cheapest possible solution of the three.

For example, in California, three new CSP projects, supported by solar subsidies, which are coming up have already switched to PV as they say it is cheaper, faster to implement and easier to get investors interested in.

The need for large quantities of water to cool CSP plants, just like in any thermal plant, has also been a major factor in the decisions to change technology. Recently, California state congress cleared a bill SB 267 on water for renewable energy projects to speed up permitting of PV projects and has gone as far as intentionally not mentioning CSP in the bill because of its high water demand.

Nonetheless, CSP has its own benefits compared to PV as energy generated can be easily stored for use during peak power demand in the evenings.

How is the price fall affecting India?

For the first phase of the Jawaharlal Nehru National Solar Mission (JNNSM) (2010-2013), 1,000 MW of on-grid solar power is to be commissioned. As per the solar mission guidelines released by the Ministry of New and Renewable Energy (MNRE), this capacity is to be split up 50:50 between PV and CSP. For the CSP part, the contracts are already signed for 470 MW and the technology cannot be changed.

For PV, projects totalling 150 MW have already been auctioned while the bidding is ongoing for the second batch of 350 MW.

The methodology adopted for awarding projects is that the Central Electricity Regulatory Commission (CERC) decides on a benchmark price per unit and project developers are asked to quote a discount on these prices. Eligible bidders who bid the highest discount prices are awarded the contracts. The entire process, called reverse bidding, for first batch was completed in December 2010.

Of the first batch of 140 MW PV auctioned and awarded, MNRE states that half of the projects (14 projects totalling 70 MW) chose Crystalline PV technology while the other half opted for Thin-film technology. The majority of the JNNSM projects are coming up in Rajasthan with a few others spread over other states.

Given that final approval for the first batch of projects occurred in July 2011, nearly eight months after the bidding, project developers ideally should weigh the benefits of thin-film and crystalline price changes while issuing final purchase orders for solar panels from August 2011 onwards. The policy makers may also have missed the advantage of changing solar market due to time lag between close of bidding and issue of purchase orders by the bid winners.

Apart from JNNSM, a few other large projects have also recently opted for thin-film technology such as 50 MW PV project from Mahagenco in Maharashtra, awarded to Megha Engineering (see 'Major thin-film projects in the pipeline'). Reliance Power, financed by soft loans from the US government, is also executing a 100 MW thin-film PV technology.

Major thin-film projects in the pipe-line

With Crystalline prices falling proportionally faster than thin-film, it is speculated that project developers would be moving more towards Crystalline. It is, however, not that simple. For the second batch of bidding under JNNSM, MNRE has issued guidelines that all crystalline cells and modules need to be acquired from Indian solar manufacturers while thin-films can be imported freely.

The guidelines state:“For Solar PV Projects to be selected in second batch during FY 2011-12, it will be mandatory for all the projects to use cells and modules manufactured in India. PV Modules made from thin film technologies or concentrator PV cells may be sourced from any country, provided the technical qualification criterion is fully met.”

India only has one manufacturer of thin-film and its production capacity is not enough to fulfil the demand. On the other hand, the local manufacturers of Crystalline PV have assured developers in the pre-bid meeting of Batch II that there is no shortage of local crystalline silicon capacity.

Project developers could possibly go for low quality Chinese thin-film in Batch II to be able to present the largest discount in the reverse bidding process and still be able to get financial backing.

The discussion on which technology will prevail is expected to go on as prices change and innovation continues at a rapid pace in the solar sector.