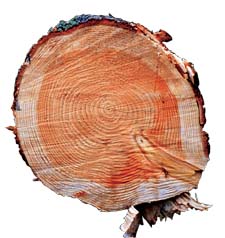 The seventh biennial issue of the 'State of the World's Forests 2007' (sofo 2007) by the un's Food and Agriculture Organization (fao) criticises poor countries for deforestation. Released in March 2007, the report does not acknowledge the role that rich countries play in wiping out the poor's forests. Weak on data, the report has been blamed by experts for wrongly defining forests.
sofo 2007 examines the progress of countries and regions, based on Sustainable Forest Management (sfm) criteria, which have been criticised by many for their little respect for rights of indigenous communities.

"fao disguises the fact that globally, forests are being replaced by monoculture tree plantations, affecting biodiversity and local communities," says Simone Lovera, of the Paraguay-based Global Forest Coalition, an ngo on forest policy.

Sharachchandra Lele, coordinator of the Centre for Interdisciplinary Studies in Environment and Development, Bangalore, says sfm criteria lack clarity. "sfm criteria are vague. The objectives of sfm can be divergent. A forest sustainable for, say, timber production, may not be so for biodiversity conservation," he says.

The report triggered quick reactions, with Greenpeace calling Indonesia the "fastest forest destroyer on the planet". The report says Indonesia has the highest rate of deforestation at 2 per cent. sofo 2007 ignores factors that drive deforestation, some experts say. "A lot of factors, like the relationship of deforestation with colonialism, need examination," says Lele.
sofo 2007 says poor countries have a "very uneven" rate of deforestation. But it credits developed countries in temperate zones with strong institutions that check deforestation and increase forested area. It says developing economies and tropical ecosystems continue to lose forests, but is silent on the developed nations' quest for forest resources including agro-based fuel, affecting the resources of poor countries.

"fao embraces agro fuels, which are rapidly becoming the number one cause of deforestation and rural devastation, especially in countries like Indonesia, Malaysia and Brazil," says Lovera, aptly describing these fuels as "deforestation diesel".

sofo 2007 says southeast Asia has a deforestation rate of 1.3 per cent. A week after the fao report was released, the Worldwide Fund for Nature-India said, at a workshop on palm oil, that the Indian demand for palm oil also added to deforestation in the region. Though fao says palm oil plantations per se are not included in its definition of forests, it says, "we also provide a breakdown of forests into 5 classes, so it is possible to exclude the area of forest plantations if people wish to do so".

fao's definition of 'forest' has few takers. "fao has deflated the definition of forests. The definition has serious anomalies. Consider this if crown cover is more than 10 per cent, it is called forest. In this way the global forest area looks bigger than when having a stricter criterion," says Matti Palo, an expert.fao defends this saying these forests are important for dry tropics. "Some countries have used a higher threshold since the methodology used does not allow a strict application of the definition given," an fao official said.


The report has many discrepancies. Lele points out that sofo 2007 says India has a forest cover of 22.8 per cent, but the Forest Survey of India's estimates say it is 20.64 per cent. "Data are mostly updated in a subjective way. There had been good chances to apply an objective updating method," says Palo.

"The contribution of forest to gdp is calculated, but what about benefits to which values have not been put?" asks Lele. "We have done some work on valuing non-tangible benefits from forests, but few countries have enough information to be able to include this as a global variable," fao replies. This argument for not paying enough attention to nuances across regions sounds a little thin, however. Palo, for instance, points out that until 1990, fao used to devote a separate section on tropical countries, which house much of the world's forests and biodiversity in its reports. Now it does not. "fao analyses integrated figures for north America, clubbing usa and Mexico," he says.

A fallout of the kind of aggregative analyses fao now favours is likely to cast poor nations in a worse light the statistics will have been recorded, without a discussion on what causes greater deforestation in poor countries and ways to tackle it.