State ministers are giving the agriculture sector a breather by ignoring the Prime Minister's call to stop subsidising power supply and agreeing instead to charge a minimum rate. But this, too, is being resisted by farmers. 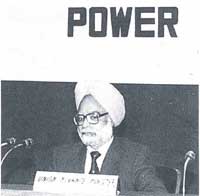 PRIME Minister P V Narasimha Rao warned a conference of state power ministers recently that the "agriculture sector (must) no longer be entitled to free or concessional power supply."

But the ministers, reluctant to ruffle the rich farm lobby, instead passed a resolution to implement by March 31 a minimum levy on farmers of 50 paise per unit for farmers - a rate that was agreed to all of one year ago.

The Union government's desperation to force "rational" pricing was implicit in finance minister Manmohan Singh's plea to raise the minimum tariff to 60 paise per unit. "Farmers," he said, "do not need a system that promises cheap but unreliable power to a few. They want a system that charges a reasonable price with a reasonable guarantee of availability."

Singh's rationale, however, had little appeal for the power ministers. "We have to nurture our farm constituencies," one of them explained. "Already, Dunkel has antagonised them. Why does the Centre want us to alienate them further?"

Andhra Pradesh state electricity board chairman Tata Rao asserted, "It is unfair to charge the agriculture sector a higher tariff. Already, the sector suffers erratic supply and irregular timings and is often the target of load-shedding."

And, a state power minister pointed out, "States have unique problems. Do you think Andhra Pradesh can raise the tariff when neighbouring Tamil Nadu supplies power free to farmers?"

Power ministry officials, under pressure from donor agencies to implement a no-loss power tariff structure, concede, "Even a tariff of 50 paise covers very little of the cost." What's worse, they see little chance of recovering even this amount. Average realisation of payments for electricity supplied to the agricultural sector during 1989-90 was 13.12 paise per unit, against an average cost of Rs 1.02 per unit. The loss to state electricity boards on this account is more than Rs 3,720 crore per annum.

Pricing issues apart, the conference only touched upon how to economise power consumption in the agricultural sector. Economist U Nagchoudhuri of the Energy Management Centre, noted regretfully, "Only political compulsions influence deliberations at such gatherings. There is little talk of efficiency improvement, which is a critical need." Statistics show the number of electric irrigation pump sets increased from 1.6 million in 1970-71 to nearly 9 million in 1990-91 and this sector's use of power rose from 10.3 per cent to 23.6 per cent during this period. In fact, power consumption by lift-irrigation pump sets alone accounts for upto 40 per cent of total electricity consumption in some states.

Even so, farm lobby leaders, gathered in Delhi to discuss ways to counter the Dunkel proposals, reacted strongly to the proposed minimum tariff. "Farmers will oppose this," said Trilokchand Sharma of the Bharatiya Kisan Sangh. "We have received representations from different parts of the country." E Balanandan, a CPI(M) member of the power ministry's parliamentary consultative committee, warned, "Further increases in the power tariff for agriculture will adversely affect the cost structure of farming activities. It may even affect production and reverse the self-sufficiency we have attained."

The Union government is quite aware of the political pitfalls that lie in the way of levying even modest power rate hikes on the powerful farm lobby. When Singh urged enhancing the minimum rate, he quickly proposed hiking support prices for farm products. Singh knows well that what one hand of the government takes, the other has to give back.